The continent of Europa is engulfed in the flames of the Second Europan War between the Atlantic Federation and the Autocratic Eastern Imperial Alliance. Although the Federation struggles valiantly against the Empire’s forces, the relentless imperial military machine threatens to consume them. With victory slipping away, the Federation executes Operation Northern Cross: a last-ditch attempt to capture the imperial capital and end the war.

Commander Claude Wallace and his loyal childhood friends in Squad E are sent to fight for the desperate operation’s success, but they will have to endure harsh bone-chilling elements, waves of imperial soldiers, and the terrifying Valkyria… and unravel a grave truth that will shake them to the core.

One of the very first PS3 game I ever bought was Valkyria Chronicles, and I immediately fell in love with it. I absolutely adore tactical RPGs and it had been a while since I played one that tipped the “instant classic” box that games from Quest Corporation or Square Enix used to make. But here came Sega with something truly special – only to sit on the franchise basically for over a decade. Yeah, there were sequels, but they jumped to the PSP and were ignored totally in the west (VC was never released here!) since the games basically were being used to promote a TV anime in Japan. There was an ill-received spin-off recently, but Valkyria Chronicles 4 is the first true return to form for a Loooong time. 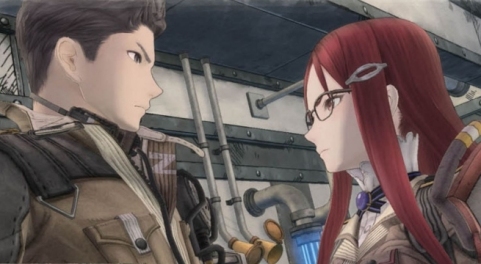 To celebrate this, Sega has decided to drum up interest in the game by releasing a demo showcasing the beginning of the full game. I don’t normally review things like demos, but I was pretty excited about this and only just found out about it when I was checking on my pre-order for the full game. When it’s all said and done, think of this as the first part of my review for when I eventually do the full game, and it’ll all come together.

This demo isn’t a meager one level affair like so many others, it contains three full chapters of the game (a prologue plus 2 main chapters) plus the ability to transfer any progress from the demo to the actual game upon release. It also has two skirmish maps, a bonus map that is ONLY available in the demo, and some unlockable things that can be done, giving this demo a surprisingly large amount of replay time if you like grinding. Each chapter is divided into small segments arranged in a scrapbook-like grid with pages that are turned to access the next segment. usually, each page contains 5-6 story segments and a battle – for fans of the original Valkyria Chronicles, this is exactly the same set-up as the first PS3 game from ten years ago (which was released later on PS4).

One of the things that I enjoy most about this series is that it has a humanity to it that most war media is completely devoid of. Instead of a “kill them all, America F Yeah! – Hoo-rah” vibe one gets from 99% of military shooters like your Call of Duties, or Battlefields, we have a story of regular people being thrown into a war to save their homeland from an encroaching enemy. An example of this is a powerful scene where Claude remarks that the field they are standing in is now completely empty of the beautiful flowers that were just there before Imperial shelling began in the area.

Keep in mind that one of the more lauded aspects of the first game in the series, was it actually had the cajones to actually address the Holocaust in an interesting way in that it introduced an ethnic minority of characters (Darksens) that were blamed for the misfortunes brought on by a previous war and were rounded up and put in camps and persecuted. One of the main protagonists HATES Darksens at the beginning of the game, so much that she comes across as fairly unlikable once her racism shows through. Yeah – that was in this game, heavy stuff for a fantasy game with water color art.

In a lot of ways, this game is a step back from some of the stuff aadded into the series on the handheld games, it does not include the branching classes or “school simulator” aspects from Valkyria Chronicles 2, or the fantastical characters found in Valkyria Chronicles 3, but that isn’t to say there isn’t any innovation at all. In fact, this is perhaps the most well-balanced game of the three I’ve played – some character classes have been tweaked such as allowing more movement for snipers, or less CP usage for tanks. There is also an entirely new character class this time around known as the Grenadier, who can fire mortar rounds at enemies. They can sort of stay behind the scenes and lob mortars at far away enemies if any team member can see somebody on the map – it’s a cool character class so far despite the small amount of time I’ve been messing with this demo.

Another addition to the game is something called “The Brave system”. When an allied soldier is downed and is nearly dead, players can consume 1 CP and increase the stats of allied units with the “Entrust” skill or can restore 1 AP with the ability to move and attack while being invulnerable for one action with the “Stand Up” skill. Considering how many times I had to restart battles in the previous games due to my unwillingness to accept perma-death of characters, this sounds like a godsend. I have not messed around with this too much, because I have been playing on “Easy” in order to leisurely take in the demo, but when I do my main play-through I will definitely be excited for the opportunity to save my soldiers necks if need arises.

For some reason, I have played this demo for like 10 hours, mostly because I decided to try to get all of my characters up the the rank of Corporal for no other reason than to be a total over-powered bad-ass once I start playing the full game, but it came be played in like an hour most-likely. All-in-all this is really fun and looks like I will have plenty of fun this fall returning to the country of Gallia. Here’s hoping this game finds success now that it’s out on multi-platform and we get things like a Valkyria Chronicles 5 and even a Valkyria Chronicles 2-3 HD remaster!

Valkyria Chronicles 4 is a tactical role-playing game developed and published by Sega. It was released in Japan for the PlayStation 4 in March 2018, and is scheduled to be released worldwide in September 2018, in addition for the Xbox One, Nintendo Switch, and Microsoft Windows.

Jump onto everything but the PC, and grab that demo, and let me know what you think in the comments!