The 1990’s were a weird time for videogames – developers were throwing all sorts of crazy ideas out there to see what the future of gaming would be – there was a wave of virtual reality games, holographic games, and my personal favorite – games that used live action FMV sequences to create the illusion of the game being an interactive film of some sort. I clearly recall being damn near obsessed with a game called Mad Dog McCree for some reason, many a quarter was wasted pretending to shoot down terrible actors the caliber of a wild west themed amusement park with a sluggish light gun. And then like that, the genre died and was regarded as an embarrassing relic of a confusing time for many years. I honestly would have never thought that a live action revival of sorts would have popped back up nearly years after their hay-day, but here we are at the tail end of the “tens” (that sounds weird) and that’s exactly what has happened.

Enter The Bunker, by British game developer Splendy Games and published by Wales Interactive. Not only is this definitely a new live action FMV game, but it’s actually surprisingly good if one takes it in as it is intended  – as an interactive film. 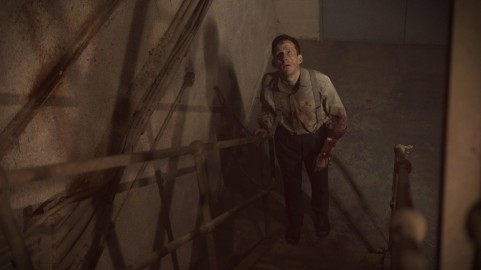 The game places the player in the shoes of a lone nuclear war survivor named John that has been living in a fallout bunker for over thirty years. After the death of his mother, John is left continuing a mindless daily routine that he has been doing every day for years only to have a series of unfortunate predicaments put his life in danger. With no contact from anyone on the outside, or hope for rescue John must face his past and make the decision on whether he’s going to leave the safety of his home or perish like so many before himself.

I think what seriously sets this game apart from the previous wave of live action games is that ACTUAL bona fide actors were hired to play the characters in the game, thus eliminating the sheer camp of about 99% of the genre. Granted, I do not know of the pedigree of any of the actors used in the 90’s, but nearly all came across as local theater actors at best, my apologies if this was not the case.

John, for instance, is played by Adam Brown who isn’t the next Johnny Depp by any means, but is a notable character actor that is perhaps best known for playing Ori, one of the dwarves in the recent Peter Jackson helmed Hobbit trilogy. The other major actor, Sarah Greene, is a theater actress that has many television roles including a small stint on Showtimes Penny Dreadful.

At its core, this is a point-and-click adventure game utilizing an inventory system and puzzle solving to progress the story. Granted, the limitations of this being something that was previously filmed rather than a rendered game, makes the trial and error nature of most adventure games null and void for the most part – the game is incredibly linear and you usually know exactly what to do even if you aren’t sure where you are going from room to room.

For instance, there is a section where John has to fix an air filter, a task he learned about reading his daily computer diagnostic screens. John is given instructions to finish this task and where to go, it’s just a matter of going to the correct areas and following directions. Other puzzles include things like door passwords and recognizing visual clues.

Depending on how open-minded one is to the fact that this is an interactive film – the relatively short gameplay time might be a turn-off to some. I would say that without a guide and a bit of exploration, this game clocks in at around 2-3 hours tops – something many adventure games are used to, but others might scoff at the length. But in all actuality, this is one case where I feel the length doesn’t matter as the narrative definitely exhausts itself by the end of the game, and the novelty would likely wear off.

Yeah, they could have added a puzzle to every door like some sort of MYST clone, but that would have slowed the game down for no reason whatsoever. 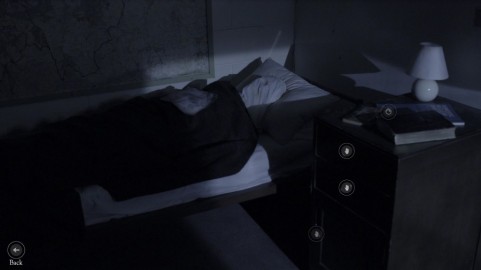 So, if we’re not critically looking at this fully as an adventure game, does it stand on it’s own as a film? honestly yes it does. This is by no means a major Hollywood blockbuster, but as a minimalist claustrophobic indie film it succeeds in creating a mood of depression and desperation that I feel few films truly achieve no matter the budget. granted, I have a perverse fascination with post-apocalyptic fiction as many long-time readers will recognize, but I feel that this is up there with some of the best in the genre.

That is not to say, that I’d like for there to be tons of games like this – if this were to get popular I’d fear this would be a fertile ground for tons of licensed games using a similar engine – and as we’ve seen with Telltale games and the many imitators of theirs, more is not always better. 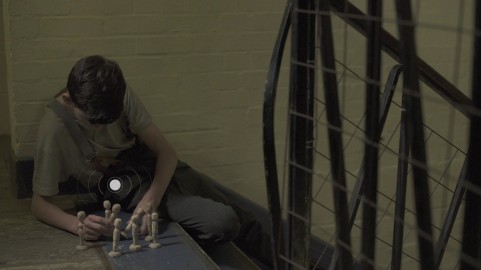 In conclusion, I really liked this experiment in interactive film. while it may not truly exceed most expectations for a modern videogame, it shows that the technology and talent needed for what many in the 90’s tried to achieve using live action FMV sequences is finally there and this this format can be successful and memorable. John’s story is bleak, heartfelt, and truly sad – when you finish the game John’s fate is left open – perhaps for a sequel, or perhaps to give the viewer an opportunity to think about his world and the ramifications of nuclear warfare and how it could affect us all.

No matter what, I recommend this game to science fiction fans that want something different. Yeah, it’s not for everyone, nor is it very challenging, but it’s at least got me excited to see more games like this – I see the same publisher also released a game called Late Shift that I’ll have to try as well.