While I can’t say I’ve been one of the more loyal Star Wars fans over the years, (the prequels lost me for a bit) some of my fondest memories of my childhood include it. Then again, I can’t imagine too many “older millennials” not having some sort of deep cultural connection to it – whether loved or hated the ever-present looming of the franchise was always there. Cartoons (Muppet Babies), other films (Spaceballs), and even songs (Weird Al) constantly had references to a series of films that almost became bigger than film itself. In what was likely a very annoying event for my family, I once taped the trilogy off of a USA network cable marathon and watched it constantly – so much that I used to know the words to the Ewok song at the end of Jedi.

Seeing my fandom really blossoming, I remember at some point that my mother gave me a series of books called The Han Solo Adventures when I was young, I think she got them from a book club or something and passed them on to me, and I was hooked on the characters of Han and Chewie. I mean, I teared up at the end of Episode 7 due to a particular incident – er, the movie came out a million years ago, if you haven’t seen the spoiler I’m sorry. I nearly cried when Han Died. When a prequel film was announced I got really excited.

“It is a lawless time. Crime Syndicates compete for resources – food, medicine, and hyperfuel. On the shipbuilding planet of Corellia, the foul Lady Proxima forces runaways into a life of crime in exchange for shelter and protection. On these mean streets, a young man fights for survival, but yearns to fly among the stars…”

That is the opening crawl for Solo: A Star Wars Story, a film that fills in some of the gaps of the titular characters backstory. Ultimately, one can think of any of Han Solo’s questionable boasts in the previous films and wonder “I wonder what the Kessel Run is?”, “Has Chewie ever really ripped someone’s arms off?” or “Did he really win The Millennium Falcon from Lando ‘fair and square’?”

The film answers all of this without seeming too gratuitous about it, thankfully. Yeah a lot of things that seem really important to the character’s later motivations and personality seem to have all taken place in the span of only a few weeks or less, but the writers resisted things like shoe-horning Boba Fett or Darth Vader into the film, a fact that I was really happy about. Yeah there was another BIG cameo in there, but it was refreshing rather than cringey.

Harrison Ford has some mighty big space boots to fill, and I was perhaps the most skeptical of the casting of Alden Ehrenreich as Han. Rather than attempting to do a prolonged impersonation of Ford, Ehrenreich nails the personality and wise-cracks of the character in such a way that you could imagine him being a 20-year-old version of the same man. To compare this to the series’ often fan-imagined competitor – Star Trek, I feel that casting of young versions of characters was done FAR better here.

Donald Glover was amazing as he always is in his role as Lando Calrissian – a portrayal that actually added a lot to the character that casual fans that don’t want to read a library of books may be unaware of. I know some folks, as tradition with any film nowadays, were mad at the insinuation that Lando was Pan-sexual now in various interviews – once seeing the movie, I love how this was handled, and while not going into specifics he was not going around and having sex with anything he saw. In fact, it was one of the more touching relationships in the franchise.

Rounding out the main cast was Emilia Clarke as Qi’ra, Paul Bettany as Dryden, and Woody Harrelson as Beckett. I was actually surprised at how much I like Harrelson’s character as I wasn’t a big fan of him being cast as he’s far too recognizable and Star Wars has always stayed away from huge stars for the most part. Granted, he basically played the same character he often plays in many films such as Zombieland and The Hunger Games  – older guy that has seem some crap and mentors the younger main character. I’ll just chalk that up to his version of how Ice Cube always plays police officers or how Liam Neeson is perpetually given roles in thrillers that involve him saving his family. Honorable mentions go to other characters like Enfys Nest who meet the “cool character that folks will become obsessed with” mold like Boba Fett.

Perhaps my only real quibble with the film was the addition of a sub-plot concerning a droid character in Lando’s employ named L3-37 that is basically a parody/homage of various modern-day social justice movements. The character is often seen advocating for droid rights, as she has “malfunctioned” to such a degree that she sees injustices involving droids all around her when few others seem to care. We even see that many of the shadier characters in the galaxy enjoy droid cage-fighting as a spectator sport, a fact that enrages her.

While I’m not mad about this inclusion, I feel that this and the war profiteering plot in Episode 8 are a bit too “on the nose” and lack the subtlety that Star Wars usually has. I mean, Star Wars isn’t Handmaid’s Tale, it’s usually not a scathing rebuke of modern-day politics unless you consider that the bad guys are space Nazis essentially. 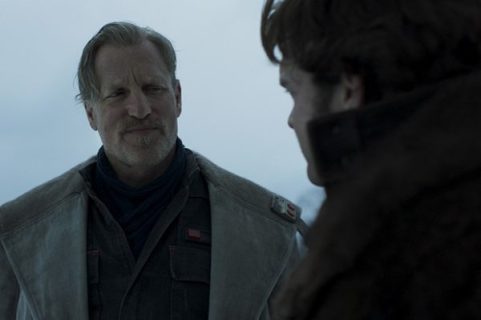 All-in all, I really liked this film – it captured the fun and spectacle of the non-‘anthology” films well, and made me remember how awesome Han and Chewie are. I’m hoping this does well enough that they make more, but who knows as it seems the film was released at a bad time and is slightly under-performing. Considering this was a film in which the original directors got fired and Ron Howard ha to “swoop in” and save the day on, I’d say they did a solid job.