This is a book I’ve had for a while lost in my “to-read” shelf from a period of time when I was subscribed to a service called Comic Bento. I was somewhat familiar with the concept of Captain Midnight since I’ve read of various radio serials of the 1940’s, but was not actually familiar with the character itself. Captain Midnight was a U.S. adventure franchise first broadcast as a radio serial from 1938 to 1949 then later turned into all sorts of other media such as comics. This current book is from Dark Horse and is part of a line of books called “Project Black Sky” that feature superheroes. To me, this is an area Dark Horse hasn’t really dabbled in too much, but it’s cool to see the market not just dominated by “the big 2”.

As for the book itself, Captain Midnight: On the Run, is basically a copy of Captain Americas’s origin, albeit slightly tweaked, applied to another old character. The Captain was busy fighting Nazis in World War II and is suddenly lost in the Bermuda Triangle. flash forward to the present day and he shows up to continue his fight against some very familiar villains. Honestly the plot is very generic and the characterization of the Captain is sort of silly at times. 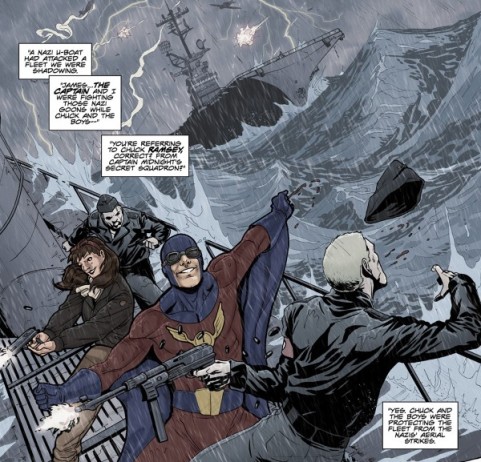 I hate to make this comparison again, but one of the main good things about Captain America is how he comes to terms with his time displacement and how America has changed in his absence. Captain Midnight, however shows up in 2014 and is basically like “cool, I can fly modern planes because I’m a genius”. This unfortunately makes the character REALLY one-dimensional since he can seemingly do anything and is never fazed. His assistant Charlotte is the voice of the audience, and we see her react to the reappearance of a man that shaped her grandmothers life, and one that she grew up hearing endless stories about.

Honestly, this book isn’t great, but the art is nice and it’s good to see Darkhorse at least try to enter the Superhero market so I’m giving it three stars since I can’t do 2 1/2. Had this been presented in a “pulp” manner or pure camp nostalgia I think it would have worked better, but what we have is what we have.