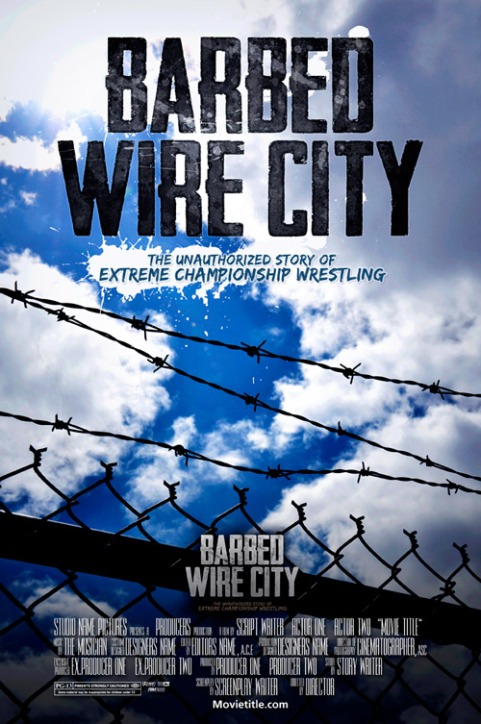 Extreme Championship Wrestling (ECW) has been dead for well over a decade. People involved such as Paul Heyman, the cultish former owner, have moved on and seemingly distanced themselves from their one time passion, thus leaving multitudes of fans clamoring for something to whet their appetites. In a post-Benoit world, professional wrestling has sort of lost its way, alienating a lot of its former fans that kept it going in the late nineties. People have tried to replicate the magic of the extreme wrestling movement, but a lot of others have tried to merely capitalize on it. Since 2001, there have been many promotional imitations, direct to DVD lamentations, and even historical revisionism released to the masses. It seems that ECW is the “dead horse” that everyone has their clubs ready to beat the hell out of. When I saw that there was yet another ECW documentary in the works via Kickstarter, I was skeptical. I thought “what else can be said?” Boy was I wrong, Barbed Wire City: The Unauthorized Story of Extreme Championship Wrestling is exactly the sort of DVD that any wrestling fan should have on their shelf.

I think my main problem with a lot of posthumously made ECW media, is that people have a tendency to use the whole thing as some sort of political device. WWE’s Rise and Fall of ECW, once thought of as the ultimate tribute of the company, reeks of a Vince McMahon victory lap over the failed venture. Another documentary, Forever Hardcore, was seen as a “counterpoint to WWE’s slightly revisionist offering, but was plagued by bitterness by those interviewed and suffered from a lack of actual ECW video footage. Possibly the most egregious misuse of ECW comes from a company that I am very fond of. TNA, the current number two wrestling federation in the United States, even did a “reunion show” called Hardcore Justice. While it had a solid card, they really had no business doing it as they were founded well after ECW’s demise and had no pony in the proverbial race. The whole thing seemed like a cashgrab.

The reason Barbed Wire City is different is that it comes from a different viewpoint; we’ve had the victorious billionaire, we’ve had the wounded former employees, and we’ve even had the copy-cats, now let’s hear from a fan. John Philapavage, the man behind the documentary, was like so many other rabid ECW fans: he lined up in long lines in the snow, huddled in crowded bingo halls, and got to meet some of his heroes. The thing that really set him apart from other fans is that he had the sense to record interviews of himself talking to the people involved. These interviews are combined with wrestling footage, and the odd Ken Burns-esque still photograph with a nifty 3D effect added in.

I have to tip my hat to Mr. Philapavage on the quality of his interviews. Mostly taken around the time that ECW was on its last legs, these interviews are both entertaining and heartbreaking. Considering the decade worth of interviews here, there are some insights that many documentaries simply cannot hope to achieve. Sometimes you would see an interview from 2001 followed by a snippet of one made more recently to compare someone’s attitude change. Take, for example, Angel Medina in 2001: as he watched the company crumbling around himself with guys jumping ship left and right, he stayed positive. More recently he talks about why he stayed in there, and the mistakes he made by doing so. Balls Mahoney was another notable interview that really got to me. He goes from very optimistic in 2001, saying that there was no way the company could go under, to a very different man a decade later. He talks about some really dark times such as a bout with depression, an episode that nearly cost him his life.

It isn’t all sadness in modern times, as the film is bookended by clips of an upstart federation out of Philadelphia called Extreme Rising ran by ECW alumni Shane Douglas. From meager beginnings, the story of Extreme Rising seems to both mirror and be haunted by its connections to ECW right from the get go. By the end of the film we are left wondering if Douglas can really recapture the magic from a decade past. I liked seeing this stuff in here because it acts as the anchor to our modern world, and really shows how much the wrestling world has changed. While one is left with a little glimmer of hope that we really could see this style of professional wrestling come back, there is a lot of shadows there as well. What was once cutting edge and trendy almost seems depressing today. 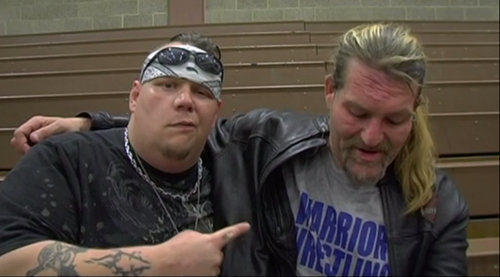 I commend the documentarians discussing the dark times when ECW was said to be “taking it too far”. They were on the cusp of being so big that the glamorized violence and dangerous stunts were causing problems, but too small to chance upsetting loyal fans by toning it down. Some ECW documentaries have a tendency to not talk about bad things aside from the occasional reference to Paul Heyman’s poor business decisions. By having wrestlers discuss their personal issues, and problems within the company, the documentary seems more “balanced”. Instead of having an agenda, John Philapavage has stayed fairly neutral. He discusses the good things, the bad things, and the downright ugly side of professional wrestling here.

My one real quibble with the film is that there was no footage of the “Mass Transit Incident”. This was a notorious controversy involving an untrained and underage wrestler that got hurt during a match, then tried to sue ECW out of existence. The man in question lied his way into filling a slot in a show and was “cut open like a stuck pig” when he allowed a wrestler named New Jack to cut him. One thing most casual wrestling fans don’t realize is that wrestlers used to have small strips of razor blades hidden either on their person or some other strategic spot to cut themselves open. This was done for dramatic effect, as the “fake” nature of the violence needed to sometimes be “spiced up” to tell a story. “Mass Transit” was not comfortable doing this himself, and asked New Jack to “help him”, which was a bad idea. This controversy was a main talking point towards the end of the film, and there was no footage, or even a stock photo of what happened. I felt that this was a missed opportunity, and could have confused someone that did not already know about it.

On a technical standpoint, the DVD is a class act; it even has its own composed music. While I would have LOVED to see this in HD on my widescreen TV, the standard definition print is very professional and looks great. There were no stutters or other anomalies, something that can’t be said for other fan productions. There are extended interviews and deleted scenes in the special features tab including a series of clips involving Billy Corgan of The Smashing Pumpkins. Despite many appearances on many wrestling shows, fans don’t seem to realize how much of a wrestling fan Corgan is, to the point that he owns his own federation. This special feature was cool because you really got to see his passion for ECW, and how it got him into the business. One thing I would love to see is an eventual “Director’s Cut” edition of this film with more outtakes, deleted scenes, and maybe some more interviews. I bet the guys at BWC films are sitting on tons of footage for this, why not get it out there!

All in all, I loved this DVD. For years Beyond the Mat was seen as one of the few great wrestling documentaries out there; now we can add Barbed Wire City to the same level of prestige. The RF video footage, the interviews, and the 3D still images all mesh in such a way that I could really see BWC Films going somewhere in the world of independent filmmaking, and I can’t wait to see what they do next. So if you are even a small fan of ECW, do yourself a favor and watch this DVD, you won’t regret it.