I think one of the more overlooked games in the Shin Megami Tensei series was the 2009 Nintendo DS game SMT: Strange Journey. Tossing aside the standard setting of some sort of post-apocalyptic Japan, Strange Journey had a refreshing plot and setting that involved a scientific expedition rather than a teenager being angsty. This scientific mission was to a black hole that unfortunately opened in Antarctica – now dubbed the ” Schwarzwelt”, this opening in the earth swallowed anything it touched and threatened to destroy all of mankind. The UN basically decided that wasn’t a great idea to leave that sitting around, and sent this tassk force in to stop it. Then demons happened… 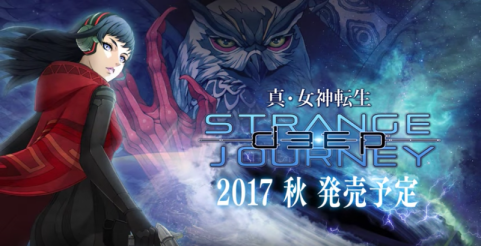 Good news for us, is that it seems Atlus plans to re-release some sort of remake of this game on the 3DS – nobody is sure what this face-lift will entail, but we see a handful of new demons and even a new character named Alex. This was revealed today in a livestream that was put up on their website. These are revealed in the following trailer:

I attempted to watch the livestream, but not knowing Japanese meant that I got little information from it. what I could gather is that there is a new Radiant Historia game coming out called Perfect Chronologia. It appears to be some sort of remake of the 2010 DS game, as is much of the content in the presentation. They also announced a new Etrian Odyssey game called Etrian Odyssey Mystery Dungeon 2 to celebrate the tenth anniversary of the series. Then we had Strange Journey, a new trailer for the Nintendo Switch Megaten game, and some news about SMT IV: Apocalypse. If you are curious, HERE is the presentation.

and here are some selected screen grabs to enjoy: