Just about three years ago I ran across a Kickstarter campaign that excited me quite a bit. A small company called Mentat Studios LLC had a vision – they wanted to produce an anime for anime fans around the world without the need for the industry standard production committees and TV networks butting in. It seems that there are a lot of industry types in Japan that are not fans of the current road that the anime market is going down e.g. visual novel anime projects and moe shows designed to sell merchandise and little else. Hiroaki Yura, the executive producer at the time, even went as far as to do a solid Reddit AMA that outlined the project’s vision:

“I hope UTD will give an example that the Japanese anime industry should really focus their attention globally, not just our tiny Japanese audience. Anime should be for the whole world, not just Japan. We don’t always want moe anime or a light novel based anime. I for one long to see anime like Akira.”

This was also the original trailer presented, none of this is in the movie, so it could be seen as a trailer of what could have been a later episode I suppose.

while the project did not make the five million dollars needed to make a full feature length film, it did make enough money for one 30 minute OVA episode. I really wish that it could have made more (although some issues the project had that I will talk about in a bit could have complicated it) because ideally Under the Dog was meant to be a TV series.

The staff consisted of Jiro Ishii, director Masahiro Ando, producer Hiroaki Yura, character designer Yūsuke Kozaki, and composer Kevin Penkin. Though the project was successfully funded, Creative Intelligence Arts and Kinema Citrus separated due to creative differences, and Kinema Citrus took full control. The split resulted in the replacement of some development staff, including Yura being replaced by Kōji Morimoto and Yoshirō Kataoka.

This really worried me, because at the time the whole project seemed somewhat “up in the air” backer rewards started getting cancelled and rumors of creative differences were hitting message-boards. Now it’s early 2017 and I thankfully got my psychical Blu Ray disc to review – technically it was released last fall digitally, but I wanted to wait until I had the disk.

The Blu Ray itself is a bare-bones affair with basically just the film and a handful of special features including the above trailer and a few sound options.

What we see in this episode is largely stand-alone, but like many 1980’s OVA episodes it’s full of stuff that would be awesome if further explained. There are characters, organizations, and other bits of world building that obviously had to be set aside to meet the running time, making this seem like a introduction to a show that will (likely) never exist. According to the original Kickstarter page, the overall plot is as such:

The story takes place within Neo Tokyo in the year 2025, five years after a severe terrorist attack at the 2020 Tokyo Olympics. Students possessing special abilities are forced into serving an elite anti-terrorist unit created by the United Nations, fighting against threats including other ability users. If these agents fail their mission, they will be killed along with their families, who have bombs planted within their heads. One member of this covert ops unit, a Swedish girl by the name of Anthea Kallenberg, seeks to find who she really is.

Not a whole lot of this actually makes much of an appearance in the actual movie, as the focus of fifteen minutes of it is built around two entirely other characters than Anthea. The OVA’s story underwent a massive reboot in February 2015, shortly after the staff shakeup and the removal of Creative Intelligence Arts from the project. This may be why the OVA’s story and feel is almost totally different from the trailer and the previously revealed plot elements (there is no mention of a terrorist attack on the 2020 Olympics in the final product, for example).

We find a young girl named Hana Togetsu who appears to be a member of some sort of clandestine organization and is referred to as a “Flower.” Flowers are forced to work under the United Nations to carry out assassinations of terrorists and other detriments to human society such as monsters called Pandoras. It’s implied that a failed mission results in imminent death for a Flower agent and her family, and considering the tension she appeared to have with her family at the beginning of the movie, it seems messed up. She has been planted (Flower! Planted! whoooaaa – I’ll get my coat…) into a school to shadow a boy that seems to have some sort of latent abilities that her organization is after. Too bad the US Military appears to run in Team America style to complicate things. 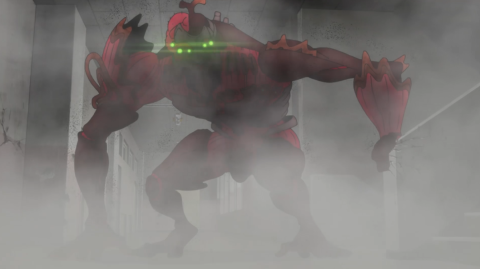 On the technical side, everything looks pretty nice although not incredibly spectacular. I can only assume that the budget and staff change-ups meant that parts of this production were rushed. Some of the animation, especially some of the American soldiers is worse than other parts of the film, so they stand out as being somewhat off. This isn’t helped by English voice acting for these characters that isn’t the best. If anyone has been anime anime with half-English and half-Japanese dialog (Beck: Mongolian Chop Squad comes to mind), they usually end up like this since they use non-native speakers or untrained people that just happen to know English.

I really enjoyed the character designs for all of the principle characters, and would have loved to know about some of the other agents that we barely see. I found out by looking at the Anime News Network Encyclopedia entry for Yusuke Kozaki to see he has done a TON of stuff I enjoy like a DS game called Osu! Tatakae! Ouendan, Fire Emblem, No More Heroes 1 and 2, and even Pokemon Go. I need to possibly read some of his manga works if I can find any that are translated.

All-in-all Under the Dog is a solid enjoyable watch that could have really benefited from being a bit longer. it definitely reminded me more of old-school anime (which is what they were going for) in that it pulled no punches, was bloody as hell, and was made for people like me in mind. It’s basically a cross between Gunslinger Girl and Evangelion in many ways, and despite my few quibbles above I’d recommend checking it out if you can. OH! and if you’re there you can try to find my microscopic name in the end credits!

I am hopeful that we get to see Anthea’s story told as this was recently posted on the official Website for this project:

We are excited to announce that a new partnership for Under the Dog is established! We should be able to officially announce more details soon, but for now, we just would like to let our backers know that Under the Dog, which started out on Kickstarter, will now expand beyond crowdfunding!

This is all due to your support. We thank you again and again, and please look forward to seeing what comes out of our new partnership!

I’m still assuming we won’t see more as this was months ago, but I’ll be excited if this turns out false and we do get more.

And in case you were wondering….

The phrase “under the dog” comes from GREAT3’s song “Under the Dog” with a line that says “Why don’t you sleep under the dog if you are so sad” for which the meaning is trying to convey (in translation) the definition we had placed on our KS page: “when one is in a situation so disagreeable that they would wish to rather be “under the dog,” a place of dishonor, misery, and filth, in order to escape their current state of affairs.” While the meaning for “underdog” can still apply to the situations the characters will find themselves in, the original meaning comes from very specific elements that are not necessarily tied to “underdog.”
–Kickstarter FAQ answer

CULTURE & MYTHOLOGY OF THE INDO-EUROPEANS