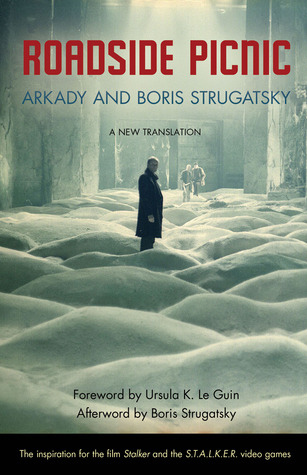 I have recently been on a big Russian science fiction kick these past few months (We, Omon Ra, Night Watch etc), and discovered that this book inspired a video game I like, so I figured that I should pick it up. The game in question, “S.T.A.L.K.E.R.: Shadow of Chernobyl“, is not really a remake of this book, but after reading the story – it borrows many plot points. It’s weird to know how old this book is (1972) and to see how it predicted the way people would treat an exclusion zone that folks try to sneak into. Granted, Chernobyl was a huge nuclear disaster, and the incident that creates tension in this book is a low-key alien encounter.

It seems that, years prior, an alien invasion of some sort occurred. These aliens, thinking that we were basically ants to them, ignored us completely, left a bunch of trash everywhere, then simply left. A comparison is made that it was like a situation where humans have a Roadside Picnic and leave garbage everywhere – animals would be scared and confused, and have no idea what we left behind. Their trash, however, isn’t just regular trash, it’s so bad that the areas affected end up called “zones”. These areas exhibit strange and dangerous phenomena not understood by humans, and contain artifacts with inexplicable, seemingly supernatural properties. Of course, a huge black market pops up to take advantage and folks start making a career out of sneaking in and stealing this stuff.

I really enjoyed Roadside Picnic, but it wasn’t perfect. It seems so short and has a somewhat unsatisfying open-ended finale. One can surmise what happens at the end, but you never really know. If you want to read something a bit different, this is a decent quick read that keeps you on the edge of your seat.