While everyone may be enjoying the infrequent adventures of a certain pair of detectives from 221b Baker Street, there is another duo of private eyes on the loose at the BBC. What? You have no idea who I’m talking about! Does Douglas Adams ring a bell? How about an unreliable brown British Leyland Princess? Of course, I’m talking about Dirk Gently and MacDuff of Dirk Gently’s Holistic Detective Agency, and their quest to understand the “fundamental interconnectedness of all things”. As with the pilot episode, in which I did a write up for a while ago (HERE), Dirk Gently isn’t mainly a science fiction show, and teeters closer to being a straight comedy show. The source material was written by Douglas Adams and has some sci-fi elements like robots, time travel and such; this keeps it on topic enough for me.

I’m glad that the BBC decided to pick the series up for some further adventures after 2010’s pilot episode, as I felt that the show had a ton of potential, despite a miniscule budget. The three part nature of this series makes me hope there is more after these initial stories. I guess the Sherlock similarities continue in that regard; just when you want more of the show, you realize that there is a miniscule amount of episodes available with a long space in between seasons.

This new series has the same cast from the pilot episode including Stephen Mangan as the titular holistic detective and Darren Boyd as Richard Macduff (Watson to Gently’s Sherlock as it were). For those totally new to the character, one can imagine Gently as the complete antithesis to Sherlock Holmes. While Holmes is amazingly clever, makes light of every miniscule detail that mere mortals would never pay attention to, and makes everyone look foolish just by his sheer presence, Gently does none of these. He makes ridiculous leaps of logic, mutters about an esoteric philosophy that only he subscribes to, comes to the wrong conclusions, ends at a result that makes absolutely no sense whatsoever, and yet is somehow correct every time. His randomness and eagerness to make a quick buck makes him look like a total con-man in just about every way, and everyone hates him for his incompetent manner in which he works.

This episode contains two seemingly separate storylines that, as anyone who has seen the pilot or read the books, will come together in the end. Dirk’s whole theory is that everything in the entire world is somehow intertwined, so things that seem totally unrelated end up being just the opposite. One of these plotlines involves the death of a conspiracy theorist that believes the Pentagon is out to get him; the other is a man that takes horoscopes far too seriously. In fact, all of the supposed red herrings that we see in the show coalesce into one large and absurdly convoluted mystery.

Sadly, while I loved the pilot, and felt that it came together very well, I felt that this episode fell a tiny bit short. There were some hilarious gags, great dialog, and enough of a mystery to keep one guessing the whole way through, but something was off. I think it just seemed rushed or something, like they tried to put way too much into one story and ended up with something incomplete as a whole. This isn’t to say that it’s a bad episode; it’s just the weaker of the two that I’ve seen. Hopefully the next two pick it up for me.

Two shadows loom over this production, both of which are unnecessary in my opinion. Some fans will be sad that these stories are not literal versions of the original books, yet borrow heavily from the source material. This has caused the whole production to be unfairly “pooped on” by many people, the irony being that Adams hated for his stuff to stay the same whenever he produced it. The Hitchhikers Guide series was originally a radio show, it was re-written as a book, and then further changed to be a 1981 TV series, all under the direct supervision of Adams. He even helped write the script for the 2005 movie, but sadly died before it could be finished. Whining about any changes in plot are silly, and aren’t in the spirit of the material. 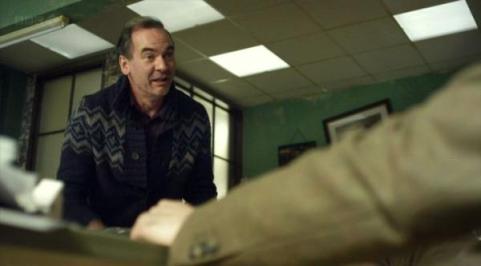 Our second shadow happens to be the aforementioned Steven Moffat helmed Sherlock craze. While I agree that Sherlock is a superior show in every way, I don’t feel that people should compare the two as they have little in common. The reason I keep mentioning Holmes and Watson when relating to the show in this review, is that the pairing has basically become a character archetype and anything similar can naturally be elaborated on as such. And while Gently may not be as “cool” as Sherlock, the show still stands as a great piece of light entertainment for weekend viewing.

In conclusion, episode one of this new series of Dirk Gently is pretty decent, if not a bit underwhelming compared to the pilot. The promise of the show and the strong acting keeps me coming back, and makes me love the show even more. If they can capture the magic ratio of mystery to jokes that we’ve seen before, I think this could go down as one of my favorite comedies of the year, if not it could be a huge disappointment. Only time will tell….