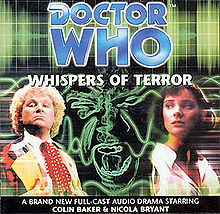 With the medium of audio plays, it was a matter of time before Big Finish explored some kind of sound based monster for their Doctor Who audio dramas; I’m just surprised that they did it so soon.  Whispers of Terror marks the third monthly Big Finish Audio, and the first to star Colin Baker (by himself) as the Doctor and Peri as his companion.

The story follows the Doctor and Peri as they end up snooping around a museum called the Museum of Aural Antiquities, where every sound is tucked away in large storage devices.  Almost immediately we find out that a murderer is afoot, and someone is changing old political speeches for someone’s gain.  If all that sounded bad, there also seems to be some kind of monster made of pure sound running around.

Colin Baker and Nicola Bryant almost immediately recapture their on-screen chemistry, and work well to make this seem like a “missing” Doctor Who episode.  Peri has always been a double edged sword for me, as Nicola Bryant was always nice to look at, but lacked a convincing American accent.  I know this may not be a real problem for those in the UK, that don’t have the ear for American speech patterns, but Peri was usually very far off.  In Whispers of Terror, Peri is in top form, as Nicola has obviously matured as an actress, and the role is acted shockingly well for me.  I feel that this revelation has really helped me gain a new found appreciation for this Doctor/companion pairing, that I really didn’t have before.

All in all, Whispers of Terror is a solid Doctor Who audio, if not a little on the average side.  So far I have noticed these dramas getting progressively better, and this is not exception.