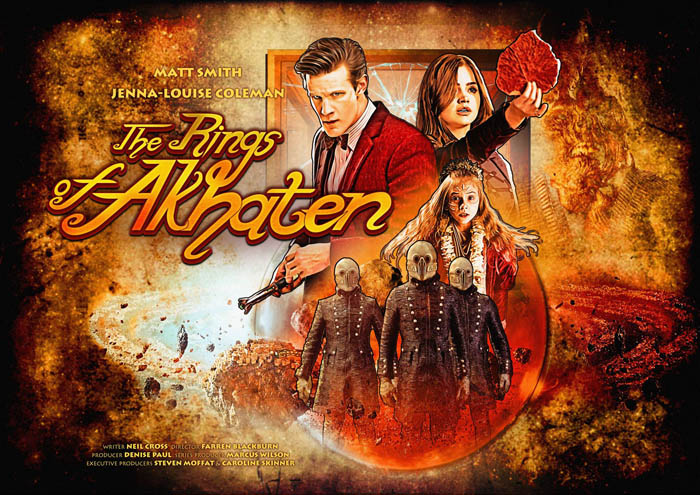 –The Doctor about Clara

Doctor Who: The Rings of Akhaten is an odd Doctor Who episode. In the first seconds, the show treats us to The Doctor essentially stalking Clara through time. We can assume that he has become completely obsessed with her mystery at this point, especially when he utters the quote that I started this review out with. Most notable of these events, he witnesses her parent’s first meeting a.k.a the origin of that leaf that she keeps tucked away in her journal – a plot point we saw last episode. Back in the 1980’s Clara’s father nearly died when he was struck in the face by a huge leaf in a gust of wind. This freak accident of nature nearly caused him to be hit by a car had it not been for Clara’s mother jumping to the rescue. Aside from the tear-jerking prologue, the episode seemed eerily reminiscent of another second outing for a companion – The Beast Below. I was willing to write it off completely as “fluff” to be quite honest until the final act, a section where we may have witnessed one of Matt Smith’s finest moments for the show.

The Dynamic duo of the Doctor and Clara decide to visit the densely populated rock-strewn rings around the planet Akhaten to show Clara some crazy alien races. This scene plays out a bit like the Cantina scene from the original Star Wars film, in that the make-up department got to go crazy and make a TON of one-off aliens. They realize that they need transport around the asteroid bazaar, so they attempt to secure a space moped with hilarious results. Before The Doctor becomes predictably separated from Clara, we find out an important nugget of information – the Akhaten market doesn’t use hard currency but rather trades in items of sentimental value.

The Doctor vanishes leaving Clara to get in the middle of a situation involving a runaway queen being stalked by creepy henchmen. This queen is a little girl named Merry, or the “Queen of Years” as she is known by her people, and she is running away from her responsibilities of singing at a ceremony. Clara reassures her that everything will be okay, but doesn’t exactly understand the whole situation. It seems that this planet practices a constant song to keep an ancient evil asleep, and Merry fears that her ruining the song will cause it to wake up. And guess what? It wakes up!

This episode would have been VERY short had the main focus not been the ill-fated ceremony that Merry was so worried about. In an odd turn of events, we get to see the entire “Feast of Offerings”, full of chanting, singing, and kneeling. While this may sound bad to the casual reader, I feel that this saved a somewhat bland episode. This hasn’t been the first time that a heartfelt song has saved an episode in my opinion, as a third season episode called Gridlock hit its climax in a similar manner. The song that was sung was utterly beautiful, and I hope to get it on my iPod as soon as I can.

I think I’ll now address my main problem with this episode – “bad guy confusion”. I think the biggest blight of the whole thing is the coolness of the alien guards “The Vigil” and their criminal under-use in the episode. When we first see them, they are hunting Merry through dark corridors using a creepy voice that could stop anyone in their tracks – “MERRY WHEREEEE AREEEE YOOOUUU!” Aside from a few scenes here and there, that’s all we get. The monster confusion doesn’t end there as we have a mummified sleeping monster that we assume is the “big bad” only to have it revealed that he is simply some sort of overseer to the real villain. To be honest I wasn’t sure of the relationship between the two creatures myself. Maybe we can think of “old beef jerky alien” as one of the “Heralds of Galactus” from Marvel comics, as the real villain is of a similar scale – the actual sun of the planet system. Come to find out these people have been blindly sacrificing folks to the “parasite sun god” for a while, only to have The Doctor take a stand and stop the bloodshed.

In a move that pulled at my Gnostic heart strings, The Doctor stands up for the poor people that cower in fear of a being that calls itself a God. He berates the planet-sized memory-eating Demiurge for all he is worth. I honestly think that this was one of the best bits of Doctor Who dialog EVER, and it really changed my mind about this episode.  The Doctor is never short of thunderous monologues, but for some reason this one really stood out to me:

Oh, you like to think you’re a God. But you’re not a God; you’re just a parasite. Eat now, with jealousy and envy and longing for the lives of others, you FEED on them, on the memory of love and loss and birth and death and joy and SORROW!

Come on then… Take mine. Take my memories. But I hope you’ve got a big appetite, because I’ve lived a long life and I’ve seen a few things. I walked away from the last great time war, I marked the passing of the time lords, I saw the birth of the universe and I watched as time ran out… Moment by moment until nothing remained, no time no space, just me. I walked in universes where the laws of physics were devised by the mind of a mad man. And I watched universes freeze and creations burn, I have seen thing you wouldn’t believe, I have lost things you will never understand and I know things; secrets that must never be told, knowledge that must never be spoken, knowledge that will make parasite gods blaze! So come on then! Take it! Take it all baby! Have it! You have it all!”

All in all, I liked this episode, but for some unorthodox reasons based on my own religious faith and my taste in music. The actual ending where Clara killed the monster with her leaf was a bit “Deus Ex Machina” in my opinion, but that’s nothing new in genre television. The actual script didn’t really have a lot of content to be honest, and it was far too similar to earlier episodes for my tastes. This was of course saved by the special effects, the casting, the music, and the acting by Jenna and Matt. Next week is an episode that could be a contender for my most anticipated episode this year –Cold War!