Before I get into my review of The Doctor, the Widow, and the Wardrobe, I’d like to talk about something that has bothered me for a while. After numerous Christmas Specials from Doctor Who, I think they should be less “Christmasy” for the most part from now on. The Christmas gimmicks worked very well at first, but seem too forced now. I’m not saying that I dislike them at all; it’s just hard to take them as seriously as some of the other episodes. When we’ve seen the likes of evil Santa robots, evil Christmas trees, Christmas star shaped spaceships and a lot more. Where exactly do we go from there?

There are only two Christmas related plots I’d like to see 1) one episode where the travel back to the historical first Christmas (but that would most likely anger many Christians), or 2) Have the Doctor Save some children from Krampus, the evil alternate Saint Nicholas that punishes bad kids. Maybe the Christmas specials should start being just “epic” long form episodes like The End of Time; that was such an episode and we didn’t have to cringe our way through demonic nutcrackers from Pluto or any other contrived plot devices.

As one can tell, The Doctor, the Widow, and the Wardrobe is vaguely based on the legendary series of novels by C.S. Lewis: The Chronicles of Narnia, and more specifically The Lion The Witch and The Wardrobe, perhaps the most loved volume in the entire series. When I heard that the episode was going to be based on the Narnia mythos, I was worried. I didn’t want to have the Doctor travel to a planet inhabited by talking lions and have to explain that Narnia was real or something. Thankfully there was no such fan-fiction fueled “fanwankery” and what we ended up with was an episode using a plot device from the series: kids that travel to a far off land in a box. This was much more like the previous Christmas special, A Christmas Carol, in that it was similar to the source material, but wasn’t a true remake of it and tried to stand on its own despite the allusions. 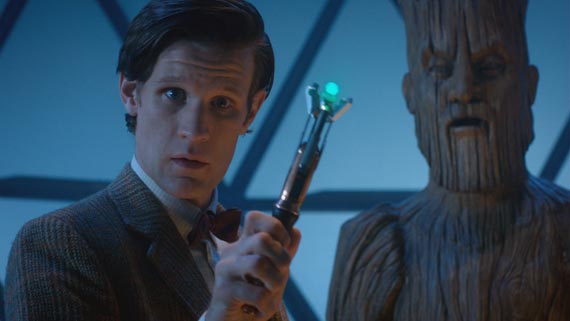 My only problem with the way it was constructed was that it felt like it honestly lacked any real “spirit” from the books it was based on. We had kids traveling to a snowy planet and all, but they weren’t really the main characters. Madge, as played by Claire Skinner, was the main character, her children were simply window dressing in the grand scheme of things. This was a story of a strong woman overcoming adversity in the face of peril to save her kids, not a tale of wonder and adventure in a new world.

I liked The Doctor, the Widow, and the Wardrobe, but felt that it played it too “safe” for the most part. It was a fun little romp that makes for a nice palette cleanser after all of the dark stuff that happened in the last few episodes of season 6. With strong performances from Skinner, a funny little cameo from Bill Bailey and a strange alien race to fight, it had all the trappings for what it was made to be: a fun Christmas bit of family viewing. Should I be sad, however, that I would have rather seen something a bit less “by the numbers”, something like the pre-credits sequence with the exploding ship?