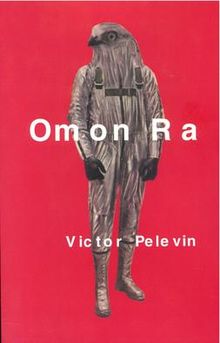 I’m fascinated by the concept, albeit pretty much firmly in the realm of fantasy, of lost cosmonauts. The idea that the USSR was so obsessed with besting America in the space race that they would stop at absolutely nothing to do so is interesting and horrifying at the same time. In a way, this is a sarcastic book about that very subject as well as a criticism of blind nationalism and the concept of “national heroes”.

One of the more outlandish things in the book takes place when the main character, Omon, enlists in a flight school only to discover that they do not create any pilots, but push their students through a series of grueling ordeals (like forced foot amputations) in order to turn them into national heroes. He thankfully escapes this fate and goes to cosmonaut training which is even more disturbing. I did a bit of research and (according to Wikipedia) this whole thing is a reference to a famous Soviet ace-pilot Alexey Maresyev, “who despite being badly injured in a plane crash after a dogfight, managed to return to the Soviet-controlled territory on his own. During his 18-day-long journey, his injuries deteriorated so badly that both of his legs had to be amputated below the knee.” In the World of Omon Ra, this is seen as the quickest way to create national heroes.

This book reminds me of Doctor Strangelove in many ways – it’s very surrealist, a dark comedy, and very acerbic towards the failings of the USSR. This book is not for everyone, but if you have an interest in history, dark comedy, or the space race this might be a fun read, and at only 150 pages or so, it’s a quick one. Perhaps my only big quibble with the book, and with many translated books, is that the writing is very simplistic, meaning that much of the nuance of the original book was probably lost in translation. I will definitely have to find more books by Victor Pelevin in the future.