“Red Dwarf is one of those shows that you are either going to love or hate. If you like your sci-fi bleak and dark like the fad seems to be these days, you may not like Red Dwarf as it pokes fun at itself at every turn. “ 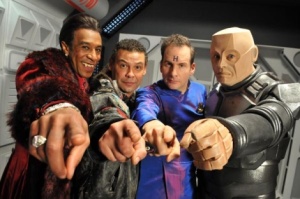 The Boys are back…

Red Dwarf is one of those shows that you are either going to love or hate.  If you like your sci-fi bleak and dark like the fad seems to be these days, you may not like Red Dwarf as it pokes fun at itself at every turn.  Much Like the Hitchhiker’s Guide series, Red Dwarf likes to be as self-referential as possible and generally mock other sci-fi tropes.  Things like unnecessarily complex time travel situations, parallel universes, and genetically engineered monsters are all par for the course.  When I had heard that we would see more Red Dwarf after such a long hiatus, I was ecstatic as I have been a huge fan of the show for quite a while.  But was ten years too long to wait?

When we last left the crew of the mighty mining vessel Red Dwarf, things weren’t going so well.  Rimmer was about to die, and the rest of the crew was stuck in a parallel universe as the titular ship smoldered to a crisp.  With an unresolved cliffhanger like that, pretty much anything would be hard to follow up, especially after such a large break.  The producers and Writers of Red Dwarf came up with something ingenious and in tone with the show, by having a “missing season” thus, not actually resolving anything at all.  Many questions persist at the beginning of Back to Earth like: Why did Ace Rimmer go back to the Dwarf, and re-join the crew as Arnold Rimmer?  What Happened to Kochanski?  I guess we’ll never know, and that makes me chuckle.  With a show that had a main character turn out to be his own father and other such shenanigans, what more would I expect. 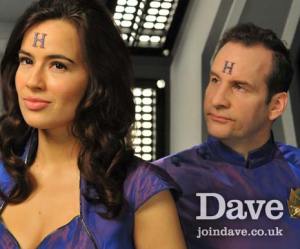 The story of Back to Earth takes place some nine years after we last left the crew.  Everyone is back aside from two notable exceptions.  Holly, the deranged ship computer (played by Norman Lovett or Hattie Hayridge respectively) has gone out of commission after Dave Lister, the show’s main character, left a bath running for nine years which fried Holly’s electronics.   Kristine Kochanski, the shows on-again and off-again love interest for Dave is dead, and Dave has matured from the experience.

After a run-in with a sea monster that had stowed away in the ship’s water supply, a hologram other than Rimmer appears claiming that Rimmer has put the crew’s lives in danger for the last time, and his holographic life is to be decommissioned.  She also decides that Lister needs to find a mate, and orchestrates a dimensional jump to take Lister Back to Earth.  Earth is not all it is bargained for, as the crew finds out that they are from a parallel dimension and are in fact, characters in a TV show called Red Dwarf.

On a storyline basis, Back to earth is a really good aside from a large stylistic change.  Rather than the joke a minute tone of older seasons, there are a few somber moments where Lister is on the brink of sadness due to his diminished status as a fictional character.  Aside from the drama, we also see home old-school sci-fi action, in the guise of homage to the film Blade Runner.  A few scenes were either directly or indirectly based on scenes from the popular Harrison Ford film, all the way down to costuming.  While these stylistic changes seem a bit in contrast to the show’s normal format, but work in the context of this special.

Carbug is definitely a silly addition, here’s hoping it stays on, if more episodes are made.

On the technical side, Red dwarf has never looked so good.  While shot on a shoe-string budget, the show has never had such well utilized computer generated effects, and other touches, and a lot of that has to do with the new HD camera that the crew used during the filming.  During the making of segment at the end of the disk, we were shown how a few shots were done using this new camera system, and it was truly awesome.

All In all, Back to earth was a good episode, but I would recommend it as a feature length viewing session.  Split up into three parts, the story structure seems to front loaded with jokes and padded in the middle with drama.  As a movie, which is what I believe the original intention to be, this series really shines, and may usher in a complete re-birth of the show if rumors hold any water.

Here is a trailer, that shows a bit of the Blade Runner parody:

welcome to my blog

Path of the Pagan Warrior