The Fastest Ship in the Universe : How Sci-Fi Ships Stack Up Created by: FatWallet.com

Ever wanted to compare a Star Destroyer‘s size to that of the Independence Day UFOs? How about The Super Dimensional Fortress Macross and The Planet Spaceball? Well, look no further than this crazy chart! It’s a work in progress, but the sheer amount of stuff on here already is crazy. a High Res version can be found HERE. 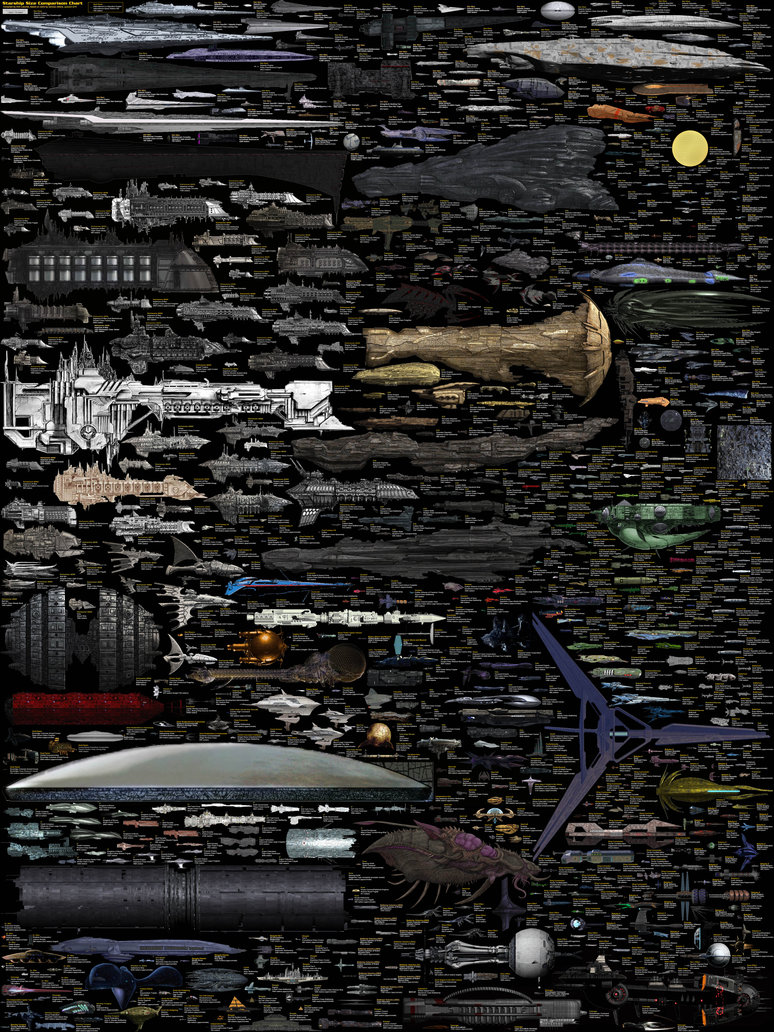 It may be no mystery that I am not a fan of the science fiction show Firefly, in fact I can’t stand the show to be quite honest.  When I am talking with my sci-fi buddies, there is usually someone that doesn’t understand the idea that people have different tastes and tries to sway me to their side.  Not only is this annoying as hell, but it makes me not like the show even more.  Some of these guys even go so far to call themselves “brown shirts” or “brown coats” which unbeknownst to them is the same name that Nazi storm troopers were referred to as.  The name fits, as some of these folks are “Nazis” in the sense of the modern vernacular which attributes anyone being over-zealous and generally “douche-baggy” as a “Nazi” e.g, Grammar Nazi.

So why don’t I like this show, and why do I get angry whenever people get pissy because I don’t like it?  I think a lot of it stems from Joss Whedon’s messiah-like status in some fan circles, as if he can do no wrong, and everything he touches turns to gold.  This is of course despite the fact that he wrote large portions of dialog for the first movie X-men including this gem:

Storm as played by Halle Berry: “Do you know what happens to a toad when it gets struck by lightning? … The same thing that happens to everything else.”

He also wrote the script for Alien Resurrection and blamed everyone else for the movie sucking, saying that it was miscast and such.  Don’t let me seem like a total ass for ripping on Whedon as I liked the original Buffy movie and the first 3-4 seasons of the show.  He may come across as an arrogant self-centered type of guy, but he is a pretty decent writer for dialog.

So the problem must lie in his fans, not just the “brown coats”, but all Whedon-media fans.  To me Whedon-ites are to science fiction fans what The Hitler Youth are to youth organizations.  Instead of watching and talking about their favorite show with other like minded fans, they see the need to try and indoctrinate everyone else into it.  If anyone resists The Lord Whedon, they immediately have to turn in their nerd license.

This very thing happened to me at work when I was helping a customer find a Battlestar Galactica DVD.  We started talking Sci-fi and he mentioned Firefly, to which I responded that I wasn’t really into the show.  The man then, obviously annoyed, asked “well….why NOT!?”  This was as if I somehow offended his religion or something.  I explained that I had not seen the whole show, but I was not a fan of the four episodes I did see, and did not plan on watching anymore.  The man then went into full-on siege-mode and started throwing out reason after reason as to why the show was underrated and why I should like it…etc.  I basically had to say “have a good one” and walk away.  It’s like rather than enjoying his show, he let the fact that it was cancelled become a bitter fist-shaped aura in his mind, waiting to punch anyone who says the show isn’t a masterpiece of human achievement.

Let this be a lesson to you guys, badgering folks and trying to essentially force people to think the way you think about a show is stupid and puts folks off of it.  If anything you guys have made me not want to read / see / hear about anything else that Joss Whedon ever produces.  Surely I can’t be the only one out there with this mindset.  It’s fun to like your own stuff, but calm down just a tad.