As is the norm with this show for a while, we have the episode split into a few separate story strands to keep everything rolling nicely and to give each character something to do. There are actually three main segments to follow: one with Abby, one with just about everyone else, and one with Greg and Anya. Mysteriously, we don’t really hear from the scientists that have been popping up in the last few episodes. You’d think that their search for the cure to the virus would get some mention here. 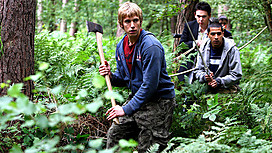 Abby found out about a group of kids occupying a large mansion from the eco-commune last episode, and has gone out to find out if her son is there. These kids have gone into full-on Lord of the Flies mode without any parental supervision, and are causing havoc around the grounds of the mansion, much to the dismay of the original owner of the mansion, a man that is hiding in the woods while his belongings get ransacked. She’s caught between these kids that “couldn’t make it outside” and said owner. She realizes that she could maybe get them to form an alliance of some sort, an option that seems easier said than done.

The second segment involves a familiar setting from last week. Here I thought the previous episode was the last time we’d see Samantha Willis and her creepy eco-commune, a place that gets worse by the second. How wrong I was, as we only had to wait one mere episode! The previous episode saw the former Health Minister becoming more and more of a ruthless despot as she clings to power. Abby was completely unnerved by the way the members of this commune handled “law” in their new community, and opted to leave despite all the good things such a community could offer.

The problem is that Willis is definitely making the hard choices that any leader should make, and as the sole authority from the government left, she’s bound to start making a few bad choices sooner than later. We saw her do things like punishing would-be supply thieves by public execution to send a message, thus continuing her fall. In episode 4 we have the arrival of Tom, Sarah, Najid, and Al in this community – possibly to stay for the long haul. It seems that despite the bad stuff going on, Abby let everyone else know about the place, and wants to move on to find her son. As one would imagine this lasts about three seconds before bad stuff goes down.

The weakest story in this episode has to be one involving Greg and Anya at the house. This segment seems to be a situation of trying to find something for these left-out characters to do, and serves little purpose otherwise. Basically, the pair find themselves under siege by a pair of rapists, and spend a few moments fighting them off. Unlike the chicken coop minor-segment in episode three, this piece was not very good.

I’d say this episode was a step down from the last one, but that isn’t a bad thing. This show usually stays pretty interesting, and the weaker episodes are still better than most other shows in the same vein. I am worried that the show will keep having segments for characters left out of the main plot such as tonight’s foray into rape-busting, as these sort of scenarios have seemed sort of half-assed so far. Hopefully we get to see what our bunker-bound lab coat guys are up to, I miss those guys 😉

The main point of my previous review was that episode one of Outcasts was utterly depressing, so depressing that it seemed like a worthy companion to all those shows about compulsive hoarding. In one episode, the producers and writers played multiple games of bait and switch on us, leading me to have no idea who the main character was. “oh look, I better pay attention to these guys” DEAD! “wait, maybe that person will be important later in the sh..” DEAD! “What about…” DEAD! I know some shows start killing off hoards of characters for dramatic effect throughout a story to build drama, but leaving half of the initial introduced cast in the first episode either dead or mortally wounded? Onward to episode two, I guess.

Episode two thankfully does what episode one should have done- it introduces us to things like backstory, character development, and gives the viewer a firmer grasp on the setting. In the previous episode, I really had no idea what the planet of Carpathia was like. At first I was lead to believe it was a desert planet based on a random sandstorm that happened, and the presence of dunes, only to find out it had vegetation and rocky hillsides. Confusing things like this made the first episode seem weird and disjointed, and not in a mysterious Lost sort of way.

This episode also introduces us to another group of people on the planet, a group of “Outcasts” who I assume are going to be the main antagonists of the citizens of Forthaven. We find out that Forthaven once had far more people than it currently does, and a virus outbreak drove them away. More specifically, they were slated to be executed, but were let go. These people resent the settlers, and want revenge.

Sadly, while there is character development present, nobody really breaks the archetypical mold they are set into, and as a result we have a cast of one-dimensional characters doing utterly predictable things. Present are characters like the wise captain, the motherly older woman, the hot-headed military man, the snake in the grass, the punk teenager, and many more. It is because of this that most of the characters feel like chess pieces created to achieve the goal of a story rather than fleshed out humans in a real world. For me, the character of Cass was the only character that I cared about in episode one. I thought he was going to be the comic relief character at first, only to find out that he’s much more valuable to the story. With the introduction of a super-creepy guy like Julius to throw disarray into the camp, I can see a glimmer of hope for later episodes.

While I didn’t hate episode two of Outcasts, It isn’t out of my doghouse quite yet. It seems that it has finally found its footing on the teetering platform of watchability, and is pretty close to being entertaining. As long as they don’t kill of these good characters I like, and people start doing things outside of their archetype I think this show could be salvageable.

I guess my annoyances were heard, as we finally get to find out a little bit about the “window dressing” members of the HMS Camden Lock crew.  On one hand we see that this episode essentially revolves around Navigation Officer Vine who spends all of his life savings on a bit of real estate, and by real estate I mean a huge uninhabitable planet made of ice and poisonous gas.  He decides to take Jeffers with him, against Jeffers actual desires.  The rest of the episode is based around Diplomatic Officer Teal using all sorts of methods to “get rid of” the rest of the cast in various ways so that a candlelit supper with the officers turns into a dinner for two with Henderson.

Sandstrom finally gets some character time

“Vineworld” Vine’s ever so catchy name for his new home world is realized pretty well in the great 19470’s Doctor Who tradition of filming in a rock quarry with weird film filters over the lenses.  Much of the comedy comes from Jeffers and his annoyance with vine due to a lack of preparation for the trip.  He decided not to bring food or water, as it would have been too heavy, and forces them to look around for crashed ships to scavenge on.  On the ship we almost get to see the unrequited love of Henderson and Teal pay off….almost.

We also get to see the ship’s navigational “enhanced” a.k.a. android get a little bit of character, something that the character has been lacking from the beginning.  Apparently she was once a human, until she ran into serious money trouble.  She agreed to have her body and mind modified in exchange for the Space Force paying off her student loan, assuming the offer would not be made if the procedure was not safe. Her personality was then overwritten, but we see shards of her true mind begin to appear as she is given a piece of chocolate by Teal.  I still think that this character is a waste of space, and adds nothing to the show, but we’ll see if that changes. 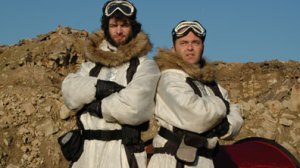 Vine and Jeffers on “Vineworld”

All in all episode three was good, and shows that the sub-par first episode was hopefully a fluke as the writers and actors come into their own here.