It’s no mystery that one of my favorite videogame franchises is the venerable “MegaTen” series, which is shorthand for Shin Megami Tensei and encompasses a “main series” and its spinoffs. The first entry in the series, Digital Devil Story: Megami Tensei, was released in 1987 on the Famicom (NES) and its success spawned the entire franchise that still has new games coming out yearly. Few people realize, however, that this entire franchise was originally a book by Aya Nishitani.

I’ve wanted to read the original novella that started the whole thing for quite a while, but the lack of an actual translated book and my desire not to read thousands of words on a computer screen kept me away until now. Apparently a fan translation has been circulating for a while, and Goodreads thankfully had a link directly to it. After a few clicks and a bit of formatting, I was all set. Side-note: I did see an old anime OVA based on this book years ago (check youtube for Megami Tensei OVA) but it’s pretty bad despite being largely true to the book.

Akemi Nakajima attends a prestigious school called Jusho High (the gifted class no less) and despite being a genius, is having trouble in his classes. He is distant, ignores his schoolwork, and has few friends. This all seems to stem from the bullying he deals with from day to day. The book opens with Nakajima fighting with a male and female classmate because he ignored her romantic advances and is some kind of lunatic and gets her boyfriend to beat Nakajima up. He is plagued by nightmares of ancient gods Izanagi and Izanami, the gods from the Japanese creation myth, roughly the equivalent to Adam and Eve in Christian culture.

Instead of being a mature adult, Nakajima uses his vast intelligence with computers and new found fascination with the occult to create a demon summoning program for his computer. He plans, with some success eventually, to get a demon to take revenge on his bullies and make him more prominent at school. What he doesn’t know is that he should never trust a demon and has his life thrown into utter chaos. It’s hard to pin Nakajima down as the “hero” of this story as he is basically a giant sociopath for about half the book. It isn’t until the presence of his love interest, a transfer student named Yumiko, that he stops being a total D-bag. I don’t mean benign either – his is directly responsible for rapes, murders, and brainwashing until he flips a total 180 to being a heroic lover this side of Shakespeare’s Romeo.

This weird characterization is one of my big issues with this book – yeah, I see all of the building blocks here that eventually became one of my favorite videogames of all time, but the characters seem one-dimensional and switch personalities half-way through the book. Perhaps this is the fault of the translation I have, or characterization was not the purpose of this story. To me, Mr. Nishitani excels at describing horrific gore and body horror, and the majority of his descriptive prose is there to make the reader’s stomach turn. 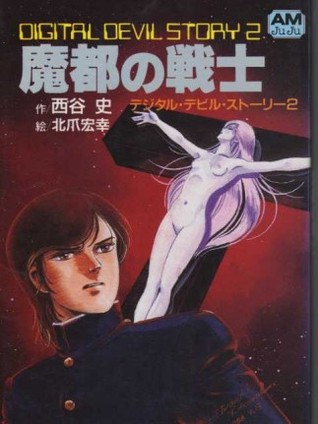 Not much to say about book two that wasn’t posted up there.

When I read Digital Devil Story: Goddess Reincarnation I characterized it as a mediocre book with bland characters (or awful ones) that had amazing descriptions of body horror but not much else. Granted, it did sow the seeds of one of my favorite video game franchises of all time, but it was a shell of what I expected.

While this book is still slightly hokey, the main character, Nakajima, is written slightly less unlikable, so at least you can relate to him this time around. The secondary cast is decent and the villain is cool. Most notably, this chapter brings in tropes like a somewhat post-apocalyptic setting and a demon-fighting mechanic that proved so popular that even Pokemon ripped it off years later.

This was very much better than the first book. If I was still rating stuff on here (I don’t because that’s dumb) I wouldn’t be able to bring myself to give it more than an average score, but this might just be worth reading. I wish I could read part three, but as of 2017 there is yet to be any sort of English translation. It seems the guy thaat was doing it got a real job translating stuff and never went back. Maybe one day we’ll see it surface