I’m torn between thinking this was good, and thinking this was somewhat pretentious. I like Grant Morrison, but he has a tendency to let his ideas get away from himself and we end up with something like Multiversity. This is a fine collection of one-shots that show obscure versions of DC characters in a lot of different circumstances all vaguely related to a possible apocalyptic event in all 52 universes of the DC “Multiverse”. The problem lies in that the “cement” that holds this book together, the story of a cursed comic book created by an evil organization to destroy reality, is easily the weakest part of the series.

This book comes across as far too ambitious for Morrison, who perhaps was trying to create a Watchmen-esque satire of DC’s obsession with these large cross-over events, and ended up making something that barely makes any sense. There is also an attempt to make the reader part of the story – ala The Neverending Story, that feels forced and unneeded. 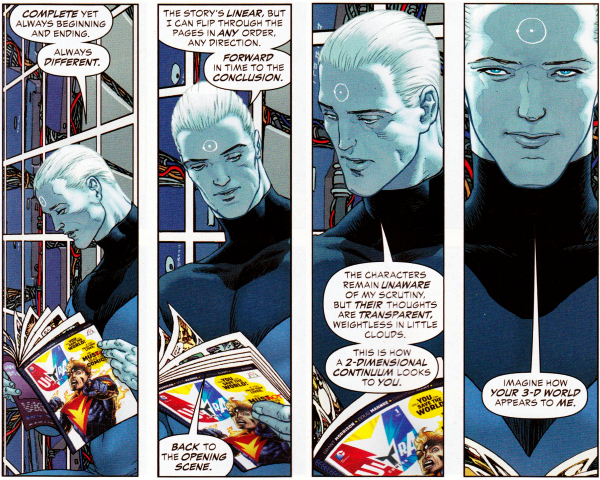 Some of the one shots were good – really good. I’m a sucker for Captain Marvel, so anything starring that character is always right up my alley, as was S.O.S, and The Uncle Sam vs Nazi Superman story. A few others were sort of bland. There was one in particular about a world of entitled DC teen superhero reality TV stars that overstayed it’s welcome to me pretty quick.

Perhaps the Most ambitious story here was Pax Americana, Morrison’s send-off of Alan Moore’s The Watchmen. The Watchmen was based on old Charlton Comics characters that ultimately were modernized to better work with the material. Here Morrison goes back to the original characters and weaves a story that is more of an art piece than an actual comic. The story is told backwards, that is each page turn reveals more about what happened before, and the reader is made to read in a bizarre figure-8 pattern that is a meme in the story. I kind of wish it would be it’s own book, but it was a bit over-the-top and considering Morrison’s hatred of Moore (and vice versa), could have been a jab at his nemesis in some way.

All in all, this is worth reading, but as a whole “Graphic novel”, it fails to seem like anything other than a stack of one-shots. It’s a shame because something like this could have been huge.