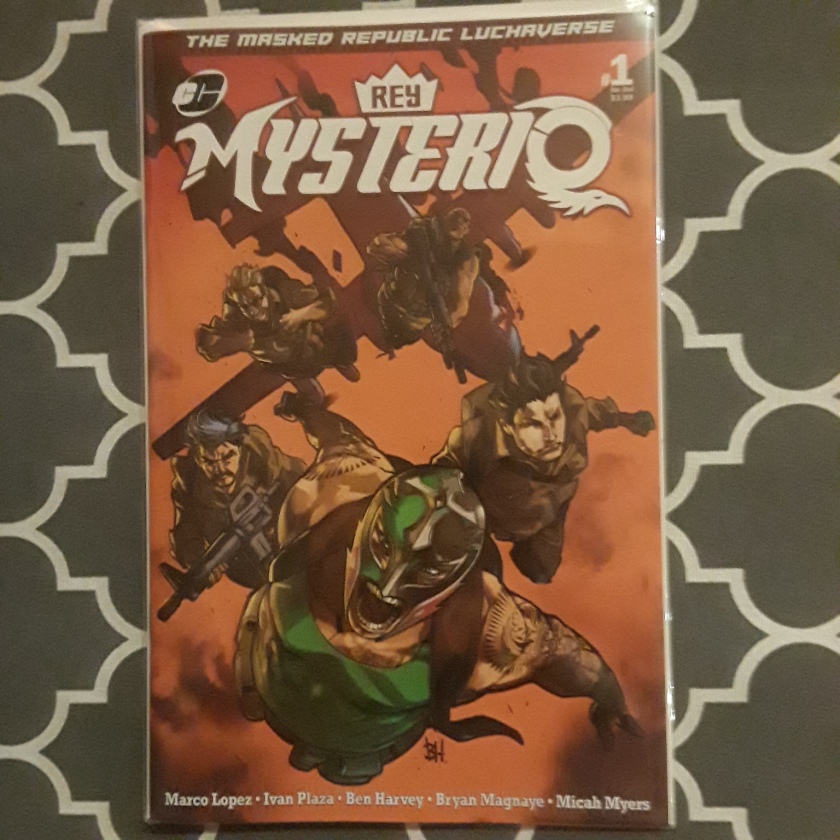 “The current in a family line of Mysterios that dates back centuries, each one trained to be a champion of the people and to take on a great evil that has been prophecised to return and plunge the world into darkness. Rey Mysterio is on a quest, aided by the military clandestine group known as “The Ambassadors”. The mission is clear: retrieve the one thing Rey will need to take on this returning evil…..THE MASK OF THE FIRST MYSTERIO!”

To be honest, when it comes to comics related to wrestling, I never really picked up too many, not even back in my heaviest comic reading days. So aside from the Joey Ryan comic I got a while back (which I should review on here) I haven’t really read too many. Luckily Masked Republic had my back recently by tucking one of these bad boys into my recent Lucha Loot Treasure Chest (Review here) via Chido Comics.

This comic reminds me a lot of the old-school luchador films from the 60’s starring El Santo and Blue Demon in that it exists as a way to create a rich mythology behind a wrestler that can’t easily be conveyed in the medium of wrestling as it would come off as VERY silly and far too over the top (well maybe not in Lucha Underground). In this comic, for instance, we find out that Rey was in fact trained in an old Mexican monastery by an old man that would not be out of place in a stereotypical Kung Fu film (I’m sure that this is 100% factual :P). he is prophecised to be a sort of messianic figure – a man that will eventually save the world from impending doom.

This comic features a handful of references to other well-known Luchadors such as Konnan (who seems to be Rey’s boss or something) and Tinieblas (who apparently took an off-page trip to the Himalayas specifically to get a map to the location of the foretold ancient mask for Rey). The mask itself is a reference to none other than Rey Mysterio Sr. While actual cameos would have been cool, I really like that this is building what I hope to be a full-on comic universe featuring luchadors. I assume that;s something that has existed in Mexico, but over here not so much.

Perhaps my only gripe was that the members of The Ambassadors serve very little purpose in the story (so far) aside from standing there and looking scared or wise-cracking while Rey beats the crap out of Zombie mountain lions using his super-powers. I would have almost preferred for the team to me made-up of actual wrestlers, but we’ll see if these guys pop up again.

The final page is an advertisement for a second one-shot featuring The Lucha Brothers (Fenix and Pentagon Jr.) Since these two are basically my favorite wrestlers at the moment I’m pretty excited to see where this goes and get my next Lucha Loot assuming that will be in there. This was a fun read for what it was and a must buy for any Lucha Fan that’s been wanting something like this for a while. Chido Comics is something that could be on the cusp of something cool, I’ll definitely keep an eye on them!