REVIEW: Star Trek: Harlan Ellison’s The City on the Edge of Forever: The Original Teleplay (2015) 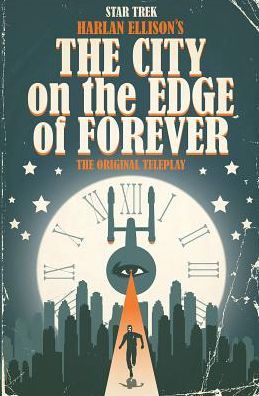 I have seen the Star Trek episode The City on the Edge of Forever many times, and it’s definitely a great episode, but I had no idea what I was in for when I picked this up. I knew that Gene Roddenberry was notorious for altering many scripts that came across his desk – sometimes for the better sometimes for the worse (There is even a film called Chaos on the Bridge about this). What I had no idea about was the bad blood between Harlan Ellison and Roddenberry over the script for this story. It was deemed un-filmable, large portions were changed and entire characters were removed – all to make it more “Star Trek”. Granted, the episode went on to win a Hugo award, but I wonder what it could have been in its original form? Luckily thanks to IDW we have a graphic novel which adapts the second draft by Ellison, and in his own words “moved him to tears”.

One of the main differences between the two versions of the story is the inclusion of an antagonist that is somewhat replaced by a drug addled Doctor McCoy (accidental of course) in the actual aired episode. Enter: Lieutenant Richard Beckwith, a drug dealer selling the illegal “Jewels of Sound”, kills Lieutenant LeBeque after he threatens to expose Beckwith’s activities to Kirk (selling drugs to people on away-missions). He storms the transporter array and goes to the planet where he later alters time. This one change already drastically changes the tone of the episode to a much darker story-line. I’m pretty sure censors would not have let that fly in 1966, but one never knows.

Another few shocking moments are racist overtones Spock has to deal with (everyone thinks he is Chinese) and a moment when Spock almost commits murder in desperation to “make things right”. Honestly this book contains enough new material for a full second part of this episode including a disturbing fate for our villain.

All in all, this is the superior version of this story and an amazing book for sci-fi fans and Star Trek fans alike.