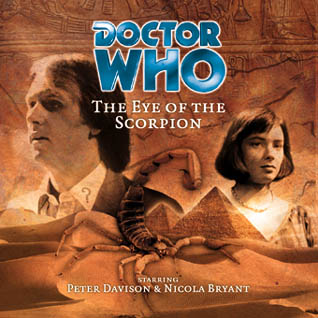 For some reason or another, this particular audio drama happens to be the one audio drama that I have listened to the most. A lot of it has to do with the time period in which I first started to listen to these, a time when I had long walks to work and back every day, and the fact that I would sometimes miss important things due to walking in traffic – thus repeated plays. Then again, I think I can chalk a lot of it up to my fascination, at an early age even, with the ancient Egyptian civilization, mythology, and everything related to it. For a long time, the movie Stargate was actually a film that I considered to be my favorite movie for much the same reason!

This adventure stars Peter Davison as The Doctor and Nicola Bryant as his voluptuous companion Peri. Neither Davison’s Doctor or Peri are my favorites if I were to lay out a big list of preferences, but I’ll hand it to Big Finish – they take things I dislike about Doctor Who and trick me into liking them! Bryant has definitely matures as an actress, and everything that annoyed me about her portrayal of the character (the terrible accent!) is gone now. She also has gone from being the eye candy of the show, merely there to twist her ankle and scream, to someone that is an actual asset to The Doctor’s travels. Big Finish has also redeemed Paul McGann‘s Doctor, Mel, and even Adric for me somewhat, it’s like they know what fans don’t enjoy about the show or something! 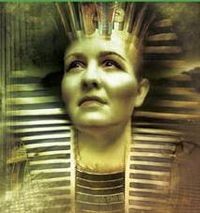 This story is perhaps Davison’s strongest yet, and considering how critical I’ve been with a few of his adventures so far, that’s strong praise. The Tardis materializes right in time for the Doctor and Peri to witness an attempted drive by assassination of a young girl on a chariot. The Doctor channels his inner-Ben Hur and saves the day without realizing that he has possibly changed the course of history completely. You see, the girl he has saved is the only daughter of the great Pharaoh Amenhotep II, Princess Erimemushinteperem (or Erimem for short), her father has died and she is possibly next in line to be pharaoh. The problem is that The Doctor has no recollection of any pharaoh named Erimem, meaning that something is wrong.

Erimem is happy to give much thanks to her saviors, and the strangers’ arrival in Thebes is the talk of court. This causes problems for a lot of her direct aide’s such as a man named Antranak, who serves as her head of security, as there have been a lot of attempts on Erimem’s life as of late, and her consorting with strange people is not good. What follows from here on is an adventure involving a disputed throne, a warlord trying to become pharaoh and an alien hand in the whole mess.

I really enjoyed Both Erimem and Antranak (who reminds me of Egyptian Brigadier) and love the idea of an unknown historical figure as a companion. We have seen so many times, the travels of a contemporary person in the Tardis, but imagine someone from ancient history doing it. Not only would that person be amazed by the future, aliens, and space, but pretty much anything else they are shown. I think this is why I was initially excited when Clara on the TV show was revealed to be a Victorian character initially, only to have my hopes and dreams dashed just like that! 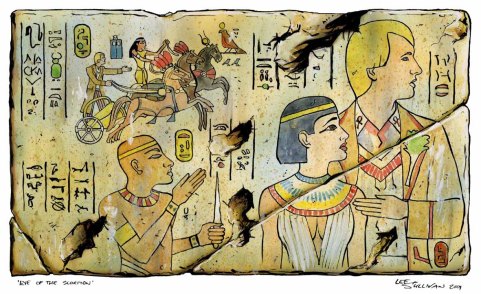 Without spoiling too much, Erimem realizes that she has no place in history and chooses to travel with The Tardis crew, I for one, cannot wait to listen to their travels. I have so far loved these “original companions” like Charley, Evelyn, and now Erimem – great characters that keep me coming back time after time. Perhaps the only downside to this drama is that it keeps with a lot of tropes seen in Hollywood films about ancient Egypt, but we really have no idea how the civilization really lived, so it’s fair game. At least it didn’t succumb to the fad of ancient alien theories, that I have no doubt would be in an Egyptian episode made today!