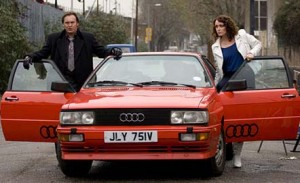 Keen-eyed ebay watchers noticed an iconic classic car make its way onto the digital marketplace last week – Gene Hunt‘s 1983 Audi Quattro from the show Ashes to Ashes. Many a fan clamored to the site to bid on their dreams of saying “Fire up the Quattro” un-ironically every time they venture out to work, but it seems that someone now owns it and all of our nerd dreams are crushed. As the Telegraph points out, there were in fact two cars used in the show, and this was the second one: “The 1983 example of the legendary rally-derived four-wheel-drive coupe was used on the second and third series of the time-travelling police drama when it was driven by the engagingly politically incorrect lead character Gene Hunt.”

You’ll notice some “battle damage” on various surfaces of the car because “The Quattro” was one of the most heart-wrenching casualties of the last moments of the show itself. Rather than restoring the car to it’s previous state, these holes were sealed and left to give it some character. The ebay listing itself gives some more details:

“In order to make it look like it was in the middle of a shoot out in the finale’ the front bumper, grille & badge were cut in half so they would fall off (now cobbled back on but still in 2 pieces), a piece of angle iron was welded to the underside of the bonnet to push it open, the o/s Headlight glass was broken (now replaced) various cowels and covers were removed under the bonnet to accommodate the wiring. Some of the switches on the dash, the dashboard to the left of the instrument cluster, the passenger headrest, passenger sun visor, and both front seats had “squibs” (small bullet hit effects) placed in them so were all damaged by either the installation or the implementation of these effects.

The windscreen, rear screen, drivers door glass and passenger quarter glass were all broken but I have replaced them to keep it watertight. The doors are missing a number of internal components, most annoyingly is the absence of the check links which means the door swing open much wider than they were designed to and could catch on the wings. The interior plastic door handles are missing so I have temporarily connected cable ties to the rods so that the doors can be opened from inside. The drivers electric window works but the passenger one doesn’t, I think there is part of the loom missing inside the door. The boot carpet, spare wheel & jack are also missing. Along with a few bits of trim around the n/s door and quarter glasses. The n/s rear lamp was damaged by the fake bullet hits along with the n/s front indicator and the o/s front fog lamp. (I have cobbled them back together but they would need replacing if you wanted to return it to the road) It has a dent just behind the petrol flap on the n/s quarter panel, this is where the SFX did a test with the bullet hole effect.

And of course there’s the bullet holes you can see in the photos, people often asked why I didn’t fill and repaint them, my reply has always been that if I did that then it’d just be another red Quattro.Of all the hundreds of people that have posed for photographs in front of this car 99% of them opt for the passenger side, cause that’s where the action is.”

Graphic Novelty²
Everything is bad for you

HISTORY & MYTHOLOGY OF THE INDO-EUROPEANS

This site is for grad students and mental health