The Tripods first came to my attention a few years ago when I stumbled upon a picture of one of the titular crafts in some sort of memorabilia magazine full of garage model kits. As I recall, I had no idea that there was some sort of “sequel” to H.G. Wells’ The War of the Worlds, and wondered why I had never heard of it. I was, of course, mistaken as the concept of these three-legged walking crafts is merely inspired by those similar Martian crafts, and have no relation otherwise. The Tripods was actually a series of “young reader” novels penned by John Christopher in the late 1960’s to the early 1980’s. The series was a success and was eventually adapted into the very television show that we’re talking about today. The production was a joint venture between the BBC and the Australian Seven network, and lasted two seasons. Sadly a third season died before it went into production.

The Tripods is immediately unsettling based solely on the setting alone. The juxtaposition of the words “A village in England: July, 2089 AD” and the primitive, somewhat pastoral, village setting we see right from the get-go sets up what I will be calling “The Reverse Shyamalan”- we have already seen the twist, let’s find out why it happened. We know that something isn’t right: either these people are some sort of Anabaptist off-shoot that hates technology, or something bad has happened in the past. This is answered almost immediately as we meet the main characters on their way to a village celebration. It seems that a neighborhood boy has reached the age at which everyone is considered an adult, and is to have his “capping ceremony”. 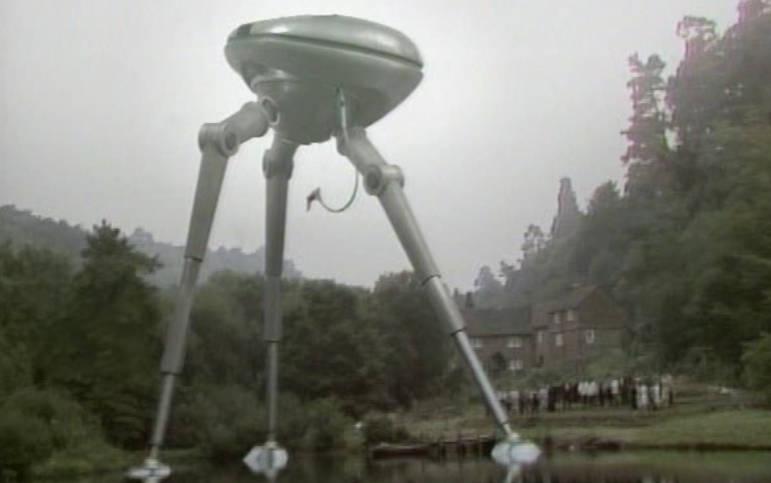 Will and his cousin Henry are disturbed by this practice as everyone that gets “capped” comes back different. Capped individuals seem to lose any sort of creativity, drive, and imagination that made them who they were . “Adults” become bland worker drones that want no other past time than work and singing the praise of their “masters”. These masters are of course gigantic three legged monstrosities called “Tripods” and the Capping Ceremony can be surmised as a way of them controlling humans. At this point we have no idea what these creatures are or what they want with the human race, but one can see that it isn’t good.

Will strikes up a conversation with an eccentric “vagrant” named Ozymandias that talks of a land of free men in the White Mountains, a land outside of the influence of the tripods. Vagrants are those that are seen as harmless by the Tripods and regular capped townspeople, but are not allowed to mingle with everyone else. Usually it is accepted that these people were “driven mad” by the capping process and are better to be not spoken about. Will is amazed by what Ozymandias has to say, and plans to escape to the European mainland to find this utopia of freedom. As with many BBC science fiction productions of the time, the special effects are dated to the eighties. The hairstyles, clothes, and even set designs are very much reminiscent of other TV productions I have seen from the time. This show does appear to have a better budget than something like classic Doctor Who, in that there are location shots, outdoor scenes, and other evidence that the whole thing wasn’t just locked into a dark studio in an industrial park somewhere. The tripods themselves are done with miniatures and puppets; these look great to me and would have been poorly done had contemporary computer generated effects come into play. I sometimes look at late eighties Doctor Who and cringe at some of the special effects. For me this eighties vibe adds to the charm, and there really isn’t anything that makes it so dated that it’s hard to watch – something that is hard to say about a handful of older U.S. productions that haven’t held up. I recall renting the TV series to the landmark miniseries V, and barely making it through the season. I think a lot of it has to do with the fact that the boys are walking around in a post-apocalyptic world that had a vaguely referenced bad thing happen in the past. If you see them find some blatantly eighties clothes in an abandoned storefront, as we see in a later episode it makes sense because humanity has regressed to something like pre-industrialized England or a reasonable facsimile thereof.

One thing that immediately caught me was the musical score as done by Ken Freeman. He is notable for being behind the synthesizer parts of the legendary rock opera version of The War of the Worlds by Jeff Wayne.Freeman did a great job of creating a solid synthesizer-based soundtrack for the series; one that is neither overpowering nor too minimalist. I always had problems with eighties shows being accompanied by either disco music (which immediately dates it) or music that sounds like a cat running across a piano to emphasize action. Here is a video of the opening theme to give you an idea of the kind of music I’m talking about. While the show hasn’t had as much exposure, I liken this to equally catchy and iconic theme songs such as The A-Team, Airworlf, and Doctor Who.

The Tripods is a solid show, and has captivated both my wife and I all this week. Perhaps it is my love for these sort of post-apocalyptic stories that has led me to such enjoyment, but I feel any science fiction fan should enjoy it unless they are adverse to seeing the eighties. The Tripods is one of those shows that keeps you on the edge of your seat; whether it be the unraveling mystery of what happened before 2089, or the constant cliffhanger endings,I was always entertained. How to watch this at your house:

For whatever reason, The Tripods was never released in the United States or Canada on home media. I assume that this boils down to Disney “squatting” on the rights to making a feature film based on the license. Disney has a habit of blocking DVD releases of things until it suits them monetarily (see Tron on DVD prior to the release of the second film). If they had been released, I could have recommended you guys just ordering this on Amazon, but a tad more creativity is needed if you want to watch this show over here. If you have a region-free DVD player, you could always import the show from the UK; make sure you read my guide to region-free DVD players for more info on importing home media to the U.S. If you’d rather not deal with things like international shipping, I did find a seller with the import in America, but one still needs the special player to run the disks”

Of course there are  also “other means”, but I’ll leave that up to you guys! If books are more your speed, there are four in the Tripods series:

The City of Gold and Lead

The Pool of Fire

When the Tripods Came