Doctor Who season finales have been generally decent throughout the current run, although most of them were getting a bit too epic until Moffat took over as show runner. When you’ve had things escalate from the earth being in peril, to a Cyberman / Dalek war, to The Master decimating everything on up, it seemed that Russell T. Davies was always trying to outdo himself each year. One thing I’ve enjoyed a lot since season five is that this tendency to “popcorn movie” finales has been toned down in favor of slightly more subdued ones. Granted, the universe is usually blinking from existence or something, but at least the Doctor is no longer part of an immense war or similar things. Tonight was at long last the finale for season seven, a season I generally enjoyed despite a feeling of disjointedness all year. Even though The Name of the Doctor seemed low key, there were far more moments where I was literally yelling “holy (expletive)!” at the screen.

First and foremost, I was amazed at the opening scene, one which shows a crew of puzzled technicians called to the scene of a theft. What we soon realize is that this was “the theft”, the one that started it all; this was when the Doctor borrowed the Tardis on Gallifrey! Clara is seen falling through time itself, and says that she has been running throughout his history in order to save him. It was at this point that I was grinning from ear to ear, as the next few minutes are filled with scenes of Clara interacting with all of the “classic” Doctors in various old episodes. This was obviously done with a computer, but there were some real cool things like a colorized William Hartnell in the mix. I know the fiftieth anniversary isn’t until November 23rd, but I think this was the moment that this fact really sank in for me.

The plot for the episode is as follows: An evil scheme is revealed by the Great Intelligence/Doctor Simeon (one again played by Richard E. Grant) to force the Doctor to his final resting place – Trenzalore. The nature of Trenzalore has been a lingering mystery since it was revealed last season, but we find out that it is the place where time travelers are laid to rest. Since Simeon has kidnapped The Doctor’s friends (The Paternoster Gang) The Doctor has to jump into action to save them, and stop Simeon at whatever plan he is concocting. It seems Simeon, flanked by the creepy “whispermen”, wants to open the “Doctor’s Tomb” and destroy the Doctor from existence in a petty act of revenge. He does this by jumping directly into the Doctor’s time stream, and reversing every success he ever had as the protector of the universe. Pretty soon entire planets begin to disappear, as does the people most important to The Doctor. Clara then realizes that the only way to stop him is to also jump into the time stream, at the cost of her own life.

“I don’t know where I am, I just know I’m running.  Sometimes it’s like I’ve lived a thousand lives in a thousand places.  I’m born, I live, I die.  And always there’s the Doctor.  Always I’m running to save the Doctor.  Again and again and again.  And he hardly ever hears me, but I’ve always been there right from the very beginning, right from the day he started running.” 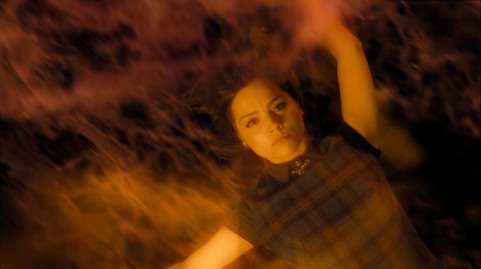 This selfless act answers the question of how Clara could have shown up multiple times and died trying to help The Doctor. When entering the portal, she has shattered her existence into millions of fragments all destined to save The Doctor from Dr. Simeon. Moved by her kindness and a little chat with his “timey wimey” wife, River Song, The Doctor decides that he will save Clara for once and leaps into his own timeline. What followed was the most spectacular and yet also infuriating cliffhanger in the history of the show. When he is re-united with Clara, The Doctor tries to divert her attention from a dark figure standing in the bowels of his time stream. This figure is his greatest secret, something the Doctor is both trying to hide and feels ashamed of. The figure turns and it is revealed to be none other than John Hurt (1984, V for Vendetta) as a mysterious forgotten regeneration of himself…..credits roll. The wait until November is going to be excruciating!

My brain is buzzing with speculation that this is an aborted regeneration of The Doctor, perhaps the one that turned rogue during the time war. Fans have often wondered which incarnation that did all the bad things that he feels terrible about all the time, looks like it may be this guy. I love this revelation because we all know what happens when The Doctor loses his grip on “humanity” just a bit. We’ve seen the Dram Lord, Mr. Clever, The Valeyard, and even what happened to the Master, we could finally be getting close to the mystery of the Last Great Time War. I know some fans will get mad that there could be a tangential incarnation of the Doctor out there, but this is not a new thing. I mentioned the Valeyard from Trial of a Time Lord. But don’t forget that there could have been pre-Hartnell era regenerations as seen in The Brain of Morbius! 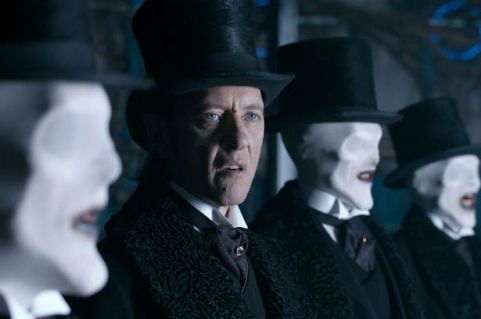 I also loved how the “name of The Doctor” was not revealed in this episode, as anyone with half a brain cell could figure out. Steven Moffat isn’t as dumb as the folks that decided to reveal the Marvel character Wolverine’s backstory; as it would ruin all the mystery, plus no one would be happy with it. The name was the “password” to his crypt, and he was nearly forced to utter it until River Song whispered it to open the door. The episodes title is actually a play on the fact that he took the name “The Doctor” as an oath to be good and help people, but one of his lives didn’t for some reason. And I’m sure we will find out why in November. While the episode did reveal just about all the mysteries related to Clara, there is a bit of muddled continuity in previous seasons. One has to wonder why The Silence were so keen to stop The Doctor from going to Trenzalore, unless they were actually not bad guys at all and knew he would cause something really bad to happen by showing up. I hope this gets addressed and doesn’t get added to other plot holes related to The Silence from way back in season five.

I absolutely loved this episode, and felt it was easily one of the better season finales. Granted I hated the finale for season three, and a few others felt a bit bloated, but that is saying a lot for me to have liked it so much. The acting was superb, the cameos from “classic” Doctors was really cool, and the finale was amazing. The long wait until November is going to be excruciating; I mean this is almost as bad as the infamous Star Trek cliffhanger from The Best of Both Worlds! 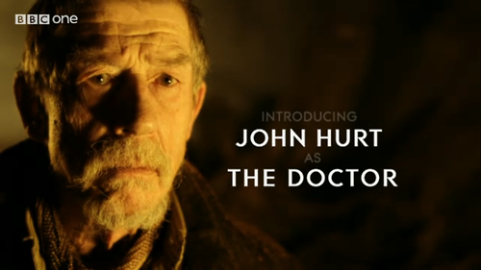 I’ve been Catching up on Doctor Who On Amazon, maybe you should as well: