Sometimes I look through my search terms on this blog’s dashboard for clues as to what I should be writing about. While I see utterly terrifying things like “Sophie Aldred latex bodysuit” or “Alexandra Roach Nude” in there occasionally, one that I see quite a lot for some reason is “Do Americans like Red Dwarf?” Well sir or madam, I am very much an American and I LOVE Red Dwarf. The problem with Red Dwarf is that it never really got the big marketing blitz that other UK shows like Downton Abbey or Doctor Who have received. It has fans, but they are fans of a niche show, that many watch on public broadcasting channels or the odd DVD. This is very similar to how Doctor Who used to be over here.

I recall dressing up as the Tom Baker Doctor (it’s in my about page) one Halloween and getting puzzled stares as to who I was supposed to be, Harry Potter was the likely candidate apparently. This was after the 2005 series of Doctor Who launched but “normal people” hadn’t heard of it before, nor did they care as it sounded weird to them. There was even this guy dressed up as Xander from Buffy: The Vampire Slayer (a.k.a normal clothes as a costume) giving me crap because my chosen fandom wasn’t as popular as his. I’d love to see his un-costumed face now! Red Dwarf needs a moment like the one fans got when BBC America started airing Doctor Who and actually pushing it, it needs those non-fans to realize it even exists. Until then it’s going to be sort of niche, but it can be the fan’s little secret. Well, that was vaguely on-topic, but you are probably here assuming this is a review of Trojan and not a long-winded anecdote about annoying people making me mad; so here is my review. 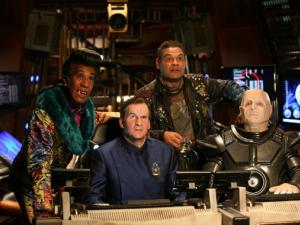 While I really enjoyed 2009’s Red Dwarf: Back to Earth, It wasn’t as strong comedy-wise as older seasons, a big problem for what is primarily a comedy show.  It looked amazing, had a better story, and was far more dramatic than any previous Red Dwarf season, but something was missing. It could have been the lack of a live audience, the contemporary setting on Earth, or any multitude of reasons; all I knew was that if it came back, I didn’t want another series like it. And here we are sitting in 2013, and I have Red Dwarf X on Blu-Ray sitting on my desk! I know I’m late to the party, as this came out ages ago, but I decided to wait until I could get ahold of the home video release to do reviews, that way I could talk about special features and the like. Some were worried that watching four middle-aged men crack jokes on each other would somehow not make a great show, but nearly twenty seasons of Top Gear can attest to the power of that very set up. Well, minus one guy, unless we count the Stig, he’s sort of like Kryten I guess!

The very first episode back starts with a bang, as we see a bit of Arnold Rimmer’s past, something that we only hear about in previous seasons. We know a lot about Lister’s past failings, dreams, and ambitions, but Rimmer has never really been fleshed out as much. The crew has apparently come closer to human civilization than ever before, as they somehow pick up a transmission from a “home shopping” type channel called The All Droid Mail Order shopping Network. Lister is apparently one of those people that gets hooked on such things, and gets in a seemingly never-ending phone queue for a device called a “stir Master”. The joke here is that Lister is literally on hold for nearly the rest of the entire episode, but his desire to save time stirring tea is immense.

While this is going on, the crew comes across a derelict, and somewhat better equipped, ship called the SS Trojan. Rimmer fiddles around with the ships control rod (which looks like a baby lightsaber) and inadvertently summons a ship carrying a holographic representation of Rimmer’s brother, Howard Rimmer. Arnold does what any brother would do when faced with the impending death of a sibling: he puts off helping so that he can pass his astro-navigation test and become an officer. He wants to do this to show off to Howard, and make him jealous. Once he fails once again, he goes the other direction dressing the Dwarfers like rejects from a Star Trek movie, and pretending to be the crew of the Trojan.

I really enjoyed this section of the episode, because Rimmer trumps his crew up so much to a ridiculous degree despite having ZERO ability to actually use the ship, much less give a simple tour of it. Rimmer insists in talking in a goofy “captain voice” as he smugly belittles his brother and hits on Howard’s crewmate, an android named Sim Crawford. Arnold introduces his “crew” by giving everyone stupid backstories and false names: Kryten becomes “under-privileged” flight coordinator Kryten Krytinski, The Cat is Navigation officer Gerald Hampton, and Lister is made out to be a “Touch T” telepath named David Listerton-Smythe. Despite obvious holes in this plot Howard doesn’t see through it at all. After Crawford reveals that she is, in fact, the villain of the piece and the reason Howard’s crew all died, Howard sacrifices himself to save Arnold, and reveals his secret. He is actually just a lowly vending machine technician and lied about the whole thing to look important. The Space Corps computer system realizes this and posthumously promotes Howard to an officer, and proposes renaming the Red Dwarf the “SS Howard Rimmer” making Arnold VERY jealous. 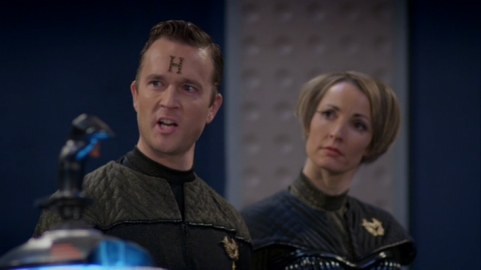 The first thing that really blew me away in Trojan, was how good the sets looked. Everything is “updated” but not in the same “white rooms and lense flares” way that we got in the recent Star Trek films. There are better computer screens and better lighting, but it still looks like ‘Dwarf. The detail here is amazing, once can really tell that they got a superb set designer that knows how to dress a set for HD in Michael Ralph. Little things like the raised textures on the walls are low key, almost unnoticeable on first viewing, but really make the scenes. I also love the fact that miniatures were used for ship and other exterior shots. I’m not an anti-computer generated effects guy, but let’s face it – Red Dwarf is made on a tight budget, why blow money on CGI? Shows like Hyperdrive fell into that trap of using cheap, unnecessary CGI and I feel that it really hurt certain episodes. It was like realizing that a spaceship on Blakes 7 was actually a hairdryer, except imagine that hairdryer blurry and unfinished! Unless you can make good effects on the cheap, stay with miniatures – they look better!

There really isn’t much of a guest cast to speak of here. Aside from the “The All Droid Mail Order shopping Network” personalities, you really only have two extra cast members. First off is Howard Rimmer as portrayed by Mark Dexter. Dexter is best known for roles in crime dramas like Law and Order UK, Ripper Street and Crusoe, but I was unfamiliar with him as I do not watch those sorts of programs. He was really good here as Arnold’s older brother; one could really imagine him giving out “wedgies” and making Arnold miserable. They chose someone that has similar mannerisms and a look that screams “RIMMER!” Our other guest was Sim Crawford, played by Susan Earl. I was only familiar with Earl from her role in Reggie Perrin, playing a nurse-like character named Sue, and I only remembered that when I checked IMDB. While a good actress, she had her voice changed and such to that of a more robotic nature, so it is hard to pin her down. She does make a pretty funny face at the end, and it made me laugh, so she’s okay in my book.

I mentioned the two of my favorite gags up there, but there really were so many to choose from. I feel that this series sort of pushed jokes too far after Doug Naylor became the sole captain at the helm. Series seven and especially eight were funny, but suffered from jokes that seemed strained at times; everything has balanced out here. All of the main actors take turns stealing scenes from each other, and even small things like the way The Cat walks into a room are made hilarious for some reason. I will say that the dynamic of just four guys works the best for me; I don’t mind Kochanski, but the show is better without her as a character. After being away for so long, you’d imagine that the boys would have trouble “clicking” into place, but that isn’t the case. Right out of the gate, the chemistry is there.

I try not to be one of those fans that clings to any particular “era” of this series as being the ultimate iteration of Red Dwarf, but I do have a distinct liking to series 4-6. One of the real reasons that I enjoyed this episode so much is that it felt right at home in one of those seasons. There is always room for improvement, but this was a solid kick-off to what I hope is a new era in Red Dwarf, it’s been far too long that these guys have been off our screens, hopefully they don’t go away this time. Keep checking back this week, as I plan to review ALL six episodes in the next few days! 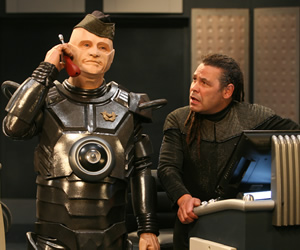 If you would like to purchase Red Dwarf X, please check Amazon: