After The Rings of Akhaten puzzled fans with what is quite possibly the most unconventional (and divisive) episode of modern Doctor Who, this time we have something so conventional it feels almost retro! This is definitely helped by the fact that a returning villain, The Ice Warriors, make their modern era debut in Cold War, and with a make-over to boot. The recipe for tonight’s episode is easy: just take one part classic “base under siege” template, add it to one part Ridley Scott’s Alien then mix it all in a bowl of Hunt for Red October.

The story follows The Doctor and Clara stumbling in on a Cold War era Soviet submarine at the height of tensions with the U.S. The crew is taking part in a routine test to see if they have the testicular fortitude available to nuke everything if the call was ever made to start a nuclear war. It seems that the crew has taken a bit of “extra cargo” in the form of a huge ice block with a presumed mammoth inside. Of course, this isn’t the case, and we have a loose Ice Warrior running around. His name is Grand Marshall Skaldak, and the poor guy thinks that he is the last of his people. In fact, he is utterly devastated that his family, including his daughter, aged to dust by the passage of almost five thousand years in his icy tomb. When faced with losses of that sort combined with his militaristic nature means that he may just cause a nuclear incident because he has nothing to lose. 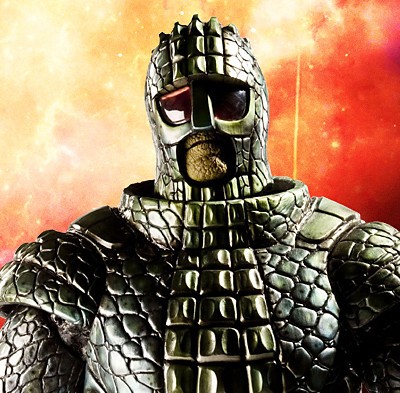 First things first, I’d like to discuss the changes made to the ice warrior costume itself. The new costume, as we see with Grand Marshall Skaldak, is a vast improvement on the older suits, without losing the iconic look of the classic series version. Really the only BIG change was the hands, and let’s be honest, most people are happy that they lost their robot claws/Lego guy hands in favor of three-fingered Ninja Turtle-like ones. The problem I always had with the 1960’s iterations are that they looked so much like a guy in an overdone fiberglass and fur suit that I was expecting Godzilla to fight them off. You could tell the actor’s visibility was bad, and the mobility was clunky and slow. The new suits look somehow more maneuverable and more armor-like at the same time despite being obviously made from a less rigid material.

As for one controversial aspect of the episode, I quite enjoyed seeing Skaldak outside of his armor. It seems like I am the only one out there, but the effect wasn’t so bad. Yeah I know his face was computer generated, and that folks are averse to any CGI creatures, but the unusual take on them was interesting. I think many people figured that there would be a random make-up faced dude under there, but what we got was more alien. Let’s be honest if it was just somebody with lizard make-up they would have been too similar to the Silurians.

Another big plus for me was the guest cast. It was almost refreshing to see a bit of media based on Russian soldiers to escape the almost propaganda-esque portrayal found in most shows. Instead of a crew of militant Stalinists hell-bent on the decimation of the United States, we have a level-headed crew of guys that look like they’d be fun to hang out with. The inclusion of veteran actor (and former audio-only Doctor Who actor) David Warner as professor Grisenko especially stood out. I’m not sure if it was the adorable grandfatherly wacko-vibe (the one that made me love Wilf so much in season 4) or his love for new wave music that I enjoyed so much, but Warner delivered the goods. I’m one of probably four people who have yet to watch the blockbuster show Game of Thrones, but I hear Liam Cunningham is quite good in it. I’m not familiar with him much aside from smaller roles, but if his stint as Captain Zhukov is any indication, he is pretty good.

On a side note while we are discussing the ship’s crew: That the guy that originally released the Ice Warrior from the block of ice was comically inept to such a hilarious degree, I’m amazed that he didn’t inadvertently kill the entire crew long before the Doctor even showed up. He causes the whole catastrophe simply because he couldn’t wait to see the mammoth they found, and took a blowtorch to it like a naughty child on Christmas Eve peeking at their presents.

The way the whole episode was put together was very good. I really enjoyed the script, which is amazing since it was penned by Mark Gatiss. I’m no Gatiss hater by any stretch of the imagination, but he has had troubles for some reason or another doing solid scripts for the new series. I loved The Unquiet Dead, but was let down in most of his other episodes. Cold War contained his old-school sensibility and his attention to historical detail very well, and unlike Victory of the Daleks, it didn’t fall apart in the end. The direction was very well done as well and retained the cinematic feel that Douglas McKinnon got so right in The Power of Three. The claustrophobic feel of all the steamy, drippy submarine corridors and the attention to shadows and darkness gave this episode a nice nod to the Ridley Scott Film Alien.

Cold War is quite possibly the best episode this half of the season so far. Keeping the tense mood and claustrophobic vibe ramped up to eleven was great, as it really helped the “mini-film” nature pop out. Skaldak is a great adversary for the Doctor, and I really hope we see him again at some point. His honor code mixed with his refreshingly real emotions and motives are a nice change for a show usually populated with villains that are evil for the sake of being evil. You really feel for the guy, even though he decides to handle his predicament pretty poorly, but honor wins out in the end. He honestly reminds me of Klingon characters throughout the many Star Trek shows. While they are usually the antagonists of any given story, rarely are they doing any action solely based on bad intentions alone. That’s what makes them so iconic in that universe, and I hope this carries over to Doctor Who. Move over Sontarans, I think the show has rediscovered its resident “Klingons”.

In closing, I really hope that professor Grisenko is still alive in the modern Doctor Who world and is enjoying the recently re-united Ultravox; hopefully he never gave up hope after they broke up around the same time as the fall of the Soviet Union!