In the end the Party would announce that two and two made five, and you would have to believe it. It was inevitable that they should make that claim sooner or later: the logic of their position demanded it. Not merely the validity of experience, but the very existence of external reality was tacitly denied by their philosophy.

In our modern world, any perceived intrusion of privacy (Google Glass for instance) is met with accusations of threatening an “Orwellian Nightmare”, or statements like “here comes big brother!”, but most miss the point entirely. George Orwell was not talking about the latest entertainment product fad, but the very real threats that he saw himself in countries like Spain, Germany, and the Soviet Union. While traveling around and living as a much less wealthy man that he actually was, Orwell did some research in order to write one of his first books and a handful of essays. Purposely clad in cheap rags and “squatting” in slums with other destitute people, Orwell had witnessed the danger of absolute political authority in an age of advanced technology first hand, especially during the Spanish Civil War. This “in your face” reporting style colored his very way of life and his political views to such a degree that he lashed out at a problem he could foresee taking over the world – totalitarianism. Nineteen-Eighty-Four was the result, a book that was feared for its perceived subversive nature by all governments alike. 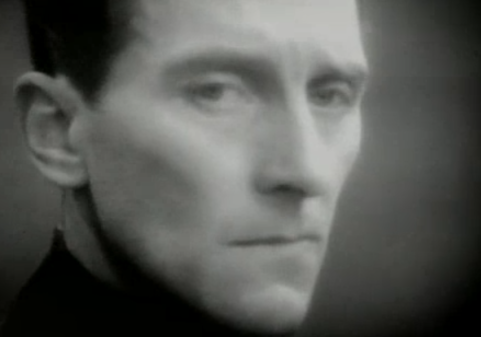 The BBC was fairly quick to create a version of the masterpiece for the fledgling television medium all the way back in 1954, just four years after the release of the novel. They commissioned an adaptation by the legendary Nigel Kneale to air live on a Sunday night. This was hugely controversial, as one could imagine, because the nationalistic post-war government was less than happy to see people in their same line of work “demonized” in such a manner; they even went as far as to attempt to ban similar programs from TV with legislature loaded with phrases such as: “the tendency, evident in recent British Broadcasting Corporation television programmes, notably on Sunday evenings, to pander to sexual and sadistic tastes”. BBC had previously produced a radio version with fewer problems, so the overreaction is a tad comical. Other companies, such as the American CBS, produced other adaptations for film, radio, and TV, but I have only seen this and the film respectively. Hopefully I can watch/listen to some other adaptations in the future – something that will pop up on here if it comes to fruition.

It’s a miracle that I was able to watch this version (for free in the public domain no-less!) as they didn’t really record too many shows then. Much like an earlier Kneale penned show that I talked about during “Quatermass Week”, the original Quatermass serial, they only had a tape of it because they recorded a monitor during the live broadcast. With no home video market, or other infrastructure for a secondary market to speak of, it’s awesome that this didn’t become lost like so many other TV gems. Aside from the Kneale pedigree, this version of Nineteen-Eighty-Four is notable in that it stars a young Peter Cushing in one of his first big roles. Cushing would later go on to become a mainstay in Hammer Films, The theatrical Doctor Who films, and eventually Star Wars.

George Orwell’s Nineteen-Eighty-Four is the cautionary tale of a man named Winston Smith. Smith is a low-ranking editor for the government’s “Ministry of Truth”, a thankless job that employs him to alter historical records for the benefit of the ruling party. The people of his home country, Oceania, live in constant fear of impending war and internal upheaval due to a strict regimen of brainwashing via propaganda and fear-mongering. Everywhere Winston goes, even his own home, the Party monitors his every move, one step out of line could mean death, or worse. But when it gets rough, he is supposed to be reassured by the heroic face plastered all over everything – that is the face of the Party’s seemingly omniscient leader, a figure known only as Big Brother. Winston slowly starts to defy his country by reading, thinking non-sanctioned thoughts, being an individual, and other horrible crimes! Big Brother will have none of that!

The acting in this production is very top notch. I always feel that it is fun to see Peter Cushing play the “good guy” in anything as he is usually known for playing scowl-faced villains such as Grand Moff Tarkin in Star Wars Episode IV: A New Hope. As we watch Winston Smith start to relish his new found spectrum of emotions rolling further down the slippery slope of thought crime, Cushing does a fine job of realizing this. There are moments where he breaks down in fits, shows passion when kissing the love interest, and anger while at rallies that shows his acting quality is really deep. I wasn’t really a fan of him as Dr. Who in those Dalek films made a few years later, but I can honestly say he can do a fine job as the leading man. I’d even go out on the limb to say that this this is my favorite role of his. Yvonne Mitchell also does a fine job as Winston’s lady-friend Julia, a role that probably set off the censors back in the day – all that kissing and such!

One thing that I immediately enjoyed about this adaptation of the novel is that it unlike the film I briefly mentioned earlier (produced in 1984 starring John Hurt), this TV drama has a lot more dialog and featured characters from the book; in fact one could say that it’s “truer” to the book. Since this version of the piece was shown live, and was produced as a stage play, it is far less cinematic than film. That isn’t to say that it’s all just people talking in drab rooms like other TV productions of the time as they do employ a handful of pre-filmed segments (such as exterior shots) which really make it feel bigger than it is. This same technique was later used in Quatermass II resulting in the same great mix of live action and filmed segues, a choice used to make scenes transition easier. I think that this “total package” is to an advantage when comparing the two as the Hollywood film felt hollow for some reason despite the striking visuals and amazing actors, and this feels both terrifying and engaging all the same.

The technical aspects of the home medium of the film are a mixed bag as one would assume from something like this. Since this film is in public domain, I do not believe there is a cleaned-up DVD re-master of it anywhere. The version that I watched (The one I have posted on the bottom of this very review) is obviously from a popular video sharing site, and has mediocre quality. I think it was ripped from a VHS tape to add insult to injury. If there is a better version out there, I was unaware of it, so I make any criticisms based on what I had at hand.  Just like Quatermass, one can tell this was filmed from a camera pointed towards a TV monitor as there is a black haze around the outside of the picture. While this is to ne real detriment to the movie, it does make it look far older than it actually is and makes certain scenes blocked in a weird way. There is also a lot of ‘ghosting” of the images, and weird changes in contrast and light – both due to the recording process as well.

BBC Sunday Night Theatre: George Orwell’s Nineteen-Eighty-Four is a solid adaptation of the original book. While there are problems with the off-air recording and how it has aged all these years, the play is still very watchable, and is the better of the two adaptations I’ve seen. As I stated before, this video, as well as other Nigel Kneale classics are in the public domain, and can be found easily on video sharing sites such as Youtube. In the political climate we live in, many have a hard time knowing what goes on in a totalitarian regime. The odd documentary on World War II may suffice for some, maybe a few North Korean news stories or videos will work for others, but for me George Orwell’s Nineteen-Eighty-Four is the closest we’ll get into a look at what goes on in these places. Whenever someone tries to change history, or whenever they try to outlaw free thought we need to heed Orwell’s warning. If we don’t Big Brother could be watching us.