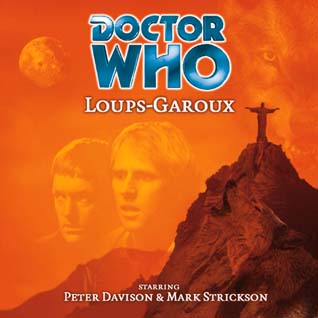 Brazil, 2080: The Doctor and Turlough arrive for the Rio de Janeiro carnival.
Is wealthy heiress Ileana de Santos all that she seems? What sinister ailment afflicts her invalid son, tended by the mysterious Dr Hayashi? And who exactly is Rosa, engaged on a secret quest to fulfil the destiny of her extinct tribe?
Time is running out for Rosa, Ileana and the Doctor, as the fearsome shadow of an ancient werewolf moves ever closer…

I’m just going to start this off by saying that I was not a huge fan of Marc Platt going into this audio drama based entirely on his earlier contributions to Doctor Who, a TV episode called Ghost Light and a book called Lungbarrow. In fact, I would rather watch the terrible charity episode Dimensions in Time than sit through Ghost Light again. Thankfully, Platt seems to be on his A-game in Big Finish as I thought Loups Garoux was quite enjoyable. This is surprising as I think that Davison has got the worst scripts of all the Doctors (up to this point); a problem that seems to be sorted out.

First thing first, Turlough is awesome and I was pretty excited to hear Mark Strickson reprise the role in this drama. This isn’t just a guest role either; Turlough is up in the forefront of this whole play. As listeners, we get a glimpse at his mysterious darker nature, a fact that he has hidden from the Doctor and the other companions. He gets separated from the Doctor at one point (as with many Doctor Who stories), and takes center stage for a bit, even getting his own temporary companion in the mix. We also see a bit of a reluctant romance for not only Turlough, but the Doctor as well (Gasp!). This added romance is surprising for those familiar with Platt’s writing as Platt himself created the ridiculous “The Doctor is Asexual and Timelords are born in looms” garbage found in Lungbarrow, a piece of novelized fanwank that many fans cling to despite countless contradictory pieces throughout the show.

The rest of the actors are pretty solid as well, especially Emily Bron as Ileana. She plays the matriarchal leader of a group of old-world werewolves clinging to a hidden existence in the future. Despite a few wonky stereotypical accents, there really was nobody to single out as the weak link of the production. Everyone had their part, and everyone was important here. Even the Fifth Doctor, who did very little in his past few plays, was on top form here both in Peter Davison’s acting and the storyline itself.

The actual story is a solid plus from me as well, as it delves into the topic of werewolves without zany Hollywood movie hijinks. The creatures are treated in a manner that I’m not used to, and I really liked it. Basically these wolf creatures live among us, but use an ability to stay hidden from our eyes. While this isn’t exactly talked about at length, it’s sufficient to explain why we don’t have huge wolves walking around all the time. Of course the wolves can also take a human form, something that sickens a few of them to their core. This shape shifting is more-or-less the basis for the main plot. You see, Ileana has a son that can’t turn to a human appearance. She wants her son to be able to walk amongst the “cut-claws”, but he has a feral monstrous disposition and appearance. Oh and there is an ancient demonic former ex-lover of hers out there trying to kill the other wolves!

I guess I gained a new-found respect for Marc Platt, a writer who I was not too enamored with in the past. I’ve actually listened to one more of his Big Finish plays that I enjoyed, but that’s a review for another day. In closing, if you want a solid Peter Davison title to start out with in Big Finish, you could probably pass on the ones before this, as Loups Garoux is definitely a new benchmark for this Doctor.

2 thoughts on “Doctor Who: Loups Garoux”