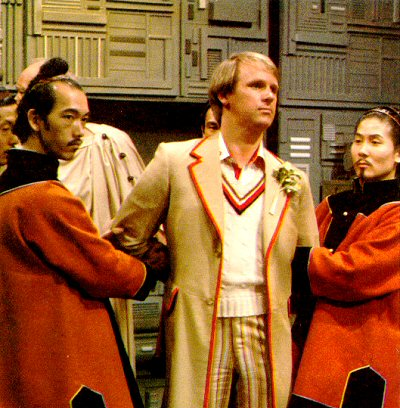 With the latest season of the current Doctor Who over with, I figured it was just about time to dive into some classic episodes that I haven’t had a chance to watch yet. Up this week I decided to bust out Four to Doomsday, a serial starring Peter Davison as the Doctor, and his standard crew of Nyssa, Tegan, and Adric. The episode opens with one of the many attempts that the Doctor tries to take Tegan home, only to find them on board an alien vessel traveling to Earth. On board, things seem to be a bit “funny” as they find Chinese, Mayan, Greek and Aboriginal crew members being led around by a race of aliens called the Urbankans. The Urbankan leader, Monarch, invites the Doctor, Tegan, Nyssa and Adric to continue the trip to Earth as his guests.

To be honest I’m not really a fan of this popular companion group as a whole. Of all the controversial views on Doctor Who out there, this is probably the main one that I subscribe to. I have always felt the later crew that had Turlough, and even Peri, were better suited to the fifth Doctor than these guys together. While I enjoy Nyssa, I find Tegan’s constant gripes at the Doctor tiresome, and equally find Adric’s “I know everything, check out my math metal!” attitude to be quite annoying. I guess I’m just not a fan of episodes where everyone bickers with the Doctor, as it generally makes him look foolish in many ways, when he should be the smartest guy there. This episode open woefully with something like five minutes of pure bickering, so much that ou wonder if they all got into some off-camera fight before this story or something. Every time I watch an episode with Adric, I always trick myself into giving him the benefit of the doubt: “yeah he’s a stubborn kid, and he’s not that bad.” Then he does something like launching into a random misogynistic rant like he does in this episode, and I want him to disappear.

Many compare this crew to the original “first Doctor” set of companions staring Ian, Barbara, and Susan; this is something I find confusing. Yes, the three were intelligent, but they didn’t continuously try to pull rank on the Doctor, nor did they stop having that sense of Jules Verne inspired wonder that I love in British sci-fi. Had Hartnell’s Doctor been with this crew, I think he would have “accidentally” left two of them behind. For this episode to fall so early on in this particular Doctor’s lifecycle, it’s almost as if some of the companions see Davison’s Doctor as too “nice”, and try to walk all over him.

The special effects in this serial are a mixed bag. While I like most of the model shots, some of the costumes are a bit wonky. Right from the beginning we see this with the Doctor’s space helmet, a device that looks to be in league with an old episode of Buck Rogers in the cheese factor. Now that I think of it, all the headpieces in the episode are pretty bad, especially Nyssa’s helmet that has “googley eyes”! The rest of the sets were actually pretty well done, if not a bit minimalist in nature. The walls are basically just a ton of random switches and dials placed everywhere. This definitely does the job at making it look like they are standing on a spaceship, or the house of a computer hoarder. To be honest, the special effects, makeup, and set design are the only shining beacon in a somewhat bland episode.

The overall plot has to be the most insane thing I have ever seen outside of the earlier Douglas Adams episodes. Not insane in an incoherent way, but insane in that the plot makes such little sense it’s almost funny. The main villain, Monarch, basically wants to invade earth so that he can strip-mine the planet for silicon. he plans to turn this into computer chips he needs to travel back in time to meet himself as God….yikes! Rather than settling on one trope (alien invasion, androids, dancing?, religion vs. science) it’s as if the production crew took a page from the creators of Family Guy and grabbed a bunch of concepts from a big hat and compiled them into a nearly competent episode.

I think the main problem lies in the utterly bad manner in which science is used in this episode. For an episode that relies on said science such as this one, it’s just inexcusable. There are many examples of this including Monarch’s bizarre time travel plan that makes no sense, except for the fact that he yells “E=MC squared”. I would have settled for some technobabble here, but using an actual scientific theory incorrectly is bad. Another quibble is when Adric claims to not know what photosynthesis is, keep in mind that he lived on a jungle planet, and is supposed to be insanely smart.

While not the worst episode of Doctor Who, Four to Doomsday is most definitely not a favorite of mine. Luckily the episodes of this season are not all of this quality, thus keeping me away from the “Davison Hater” category that many toss out there.